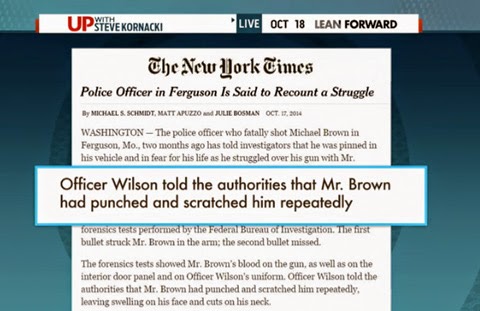 MSNBC’s Steve Kornacki and Amanda Sakuma discuss the recent New York Times article which reports that Police Officer Darren Wilson’s version of events in the deadly shooting of teenager Michael Brown says he was pinned in his car by Brown and feared for his life.

This version of the shooting doesn’t jive with other witnesses at the scene.

A grand jury in Missouri is currently deliberating whether or not to indict Officer Wilson on any charges. An announcement from the grand jury is expected sometime between mid-November and January.