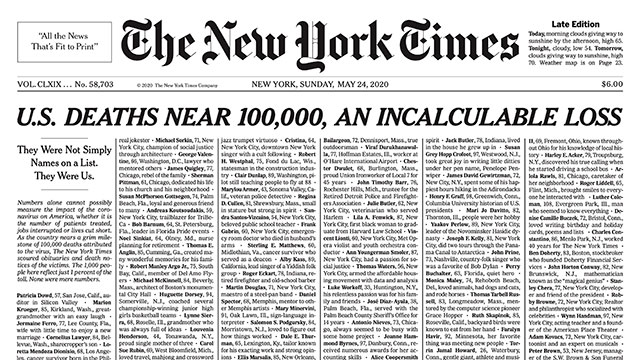 The front page of today’s New York Times lists one-sentence obituaries of 1,000 people who have died from the COVID-19 pandemic here in the United States.

With the death toll about to cross the 100,000 mark, those names represent a scant 1 percent of those lost in just over 3 months – an average of 1,100 deaths a day.

Instead of the articles, photographs or graphics that normally appear on the front page of The New York Times, on Sunday, there is just a list: a long, solemn list of people whose lives were lost to the coronavirus pandemic.

As the death toll from Covid-19 in the United States approaches 100,000, a number expected to be reached in the coming days, editors at The Times have been planning how to mark the grim milestone.

Marc Lacey, National editor, had warned Tom Bodkin, chief creative officer of The Times, that the milestone was coming. “I wanted something that people would look back on in 100 years to understand the toll of what we’re living through,” Mr. Lacey said in an email.

There’s an interactive article on the Times‘ website expounding on the list of those lost and included on the front page.

As the Times was prepping its cover story yesterday, Donald Trump played golf at his National Golf Club in Sterling, Virginia. According to reports, he is playing another round of golf again today.

CNN notes this is his 358th visit to one of his properties and his 266th trip to one of his golf clubs since he took office in January 2017.

The Biden campaign noted the widely divergent perspectives on the gravity of the COVID-19 threat.

Nearly 100,000 lives have been lost, and tens of millions are out of work.

According to the pool report, Trump's motorcade arrived at Trump National Golf Club in Sterling, VA at 10:30 AM.

The president is at his private golf club for the second day in a row during a global pandemic.

He golfs at Trump properties.

So he is stealing our money, while we die.

Trump arrives at his Virginia golf club for the second time this weekend. Per CNN’s count, this is his 358th visit to one of his properties and his 266th trip to one of his golf clubs since he took office in January 2017. He’s golfed this weekend for the first time since March 8

Trump is looking hard for a cure in the 12th bunker at Trump National Golf Club this afternoon https://t.co/DHTb3dhaq9

My thoughts last night in the @CNNSitRoom on this very special @nytimes front page as we approach 100,000 coronavirus deaths in the United States. pic.twitter.com/Zi21268DrO