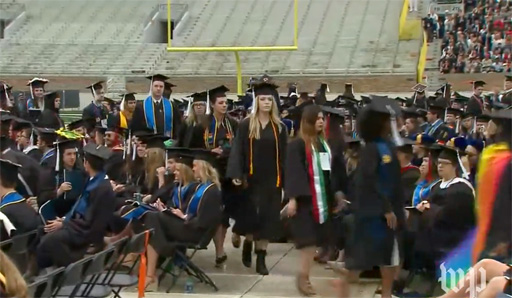 At today’s graduation ceremony for Notre Dame’s class of 2017, dozens of students stood up and left as Vice President Pence began his commencement speech.

This was not a surprise, but rather a staged protest some students had been planning for weeks. When Notre Dame announced that the vice president and former governor of Indiana would be the university’s 2017 graduation speaker in March, the student organization WeStaNDFor began brainstorming ways to take a stand.

Bryan Ricketts, who served as Notre Dame’s student body president from 2015-16 and graduated Sunday with a dual-degree in political science and chemical engineering, was one of the leaders. Ricketts told IndyStar that many of his peers were “upset and hurt” by the school’s decision to invite Pence because his “policies have impacted the humanity of certain graduates.”

WeStaNDFor explained in a release that they are primarily protesting Pence’s opposition to gay rights, his attempts as governor to prevent Syrian refugees from resettling in Indiana, his support of President Donald Trump’s immigration travel ban, and his opposition to sanctuary cities that do not enforce federal immigration laws.

The walkout was planned well in advance with leaders of the action, including consulting with the local police to find the most peaceful manner to make their statement.

The group posted instructions for how to walkout on their website:

The group even posted instructions on how to leave: “Walk away from Pence quietly, in confidence, with your head up high, taking your time. Embrace the moment, maybe even hold hands/lock arms with those joining you.”

Watch part of the walkout below.