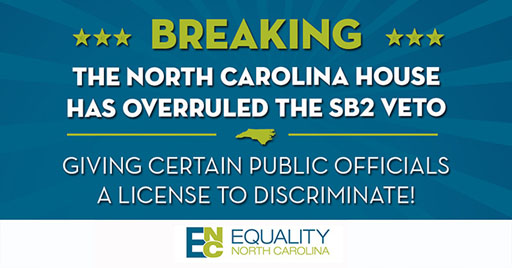 The North Carolina House has just voted to override Gov. Pat McCrory’s veto of Senate Bill 2, which would allow state magistrate’s to “opt-out” of their duty to perform same-sex marriages based on “sincerely held religious beliefs.”

With the House’s vote, 69-41, the bill, which now becomes law, excuses North Carolina magistrates and other public officials to perform marriage services for couples with whom they do not agree.

Last week, the veto was overridden in the Senate by a vote of 32-16.

“We are disappointed to see the House vote against the the legal rights and best interests of LGBT people and of the entire state of North Carolina,” said Sgro. “From the business community to local leaders to the governor, North Carolinians have stood up and said Senate Bill 2 is deeply problematic and discriminatory legislation. While it targets same-sex couples, in the process it creates problems for all North Carolinians who seek use of taxpayer-funded public services.”

Sgro added, “The North Carolina General Assembly should be focused on creating jobs and expanding public education rather than legislating against settled laws governing the freedom to marry. Equality NC will be working with its partners to determine whether this terrible bill will hold up to legal scrutiny.”