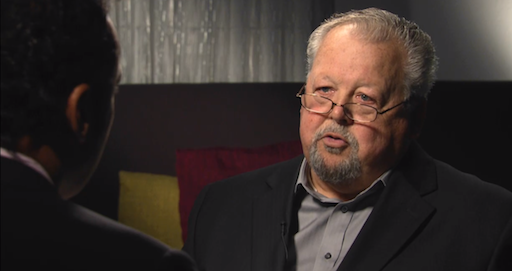 North Carolina county precinct GOP chair Don Yelton has resigned from his post as a direct result of an interview that ran last night on The Daily Show.
“Yes, he has resigned,” said Nathan West, a spokesman for the Buncombe County Republican Party. According to Business Insider, West said that the party asked for Yelton’s resignation in “direct response to the interview.”
In the interview, Yelton insisted that the voter-ID law is “not racist” before admitting that he has been called a “bigot” in the past. He defended a picture of President Obama “sitting on a stump as a witch doctor” as making fun of the “white half” of the president. And, he said if the law “hurts a bunch of lazy blacks who just want the government to give them everything, so be it.”
When Yelton started throwing around the “n-word” and complaining that only black people are allowed to use it, The Daily Show’s Aasif Mandvi stopped him to ask, “You know that we can hear you, right?”
Ladies and gentlemen, your Republican party unfiltered.