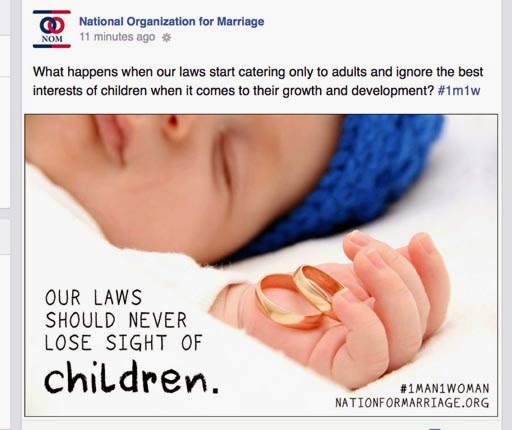 Note the latest graphic fail by the ironically named National Organization for Marriage.

The anti-gay rights group put out this graphic today with the tag “Our laws should never lose sight of children.”  Because – we’re always thinking about the children, riiiiight?

Then, what parent would actually put a small object like a wedding ring in a baby’s hand?  Any parent will tell you the first thing a baby does with a small object is put the object in it’s mouth.  And then you know what happens.

So this graphic is a big ole fail for NOM, who clearly doesn’t keep “the best interests of children.”  So busy hating on the gays, they forgot common sense.

As LGBT activist and dad Jeremy Hooper of Good As You put it:

As a parent of an infant, my eyes are like laser beams in constant hunt of objects that might pose a choking hazard to my little peanut.

But while I know that anything small enough to pass through a toilet paper roll is a potential danger, apparently NOM is not concerned enough about infants’ growth and development to keep potential dangers out of the vulnerable baby’s hands.

This graphic is like a warning poster from a pediatrician’s office.