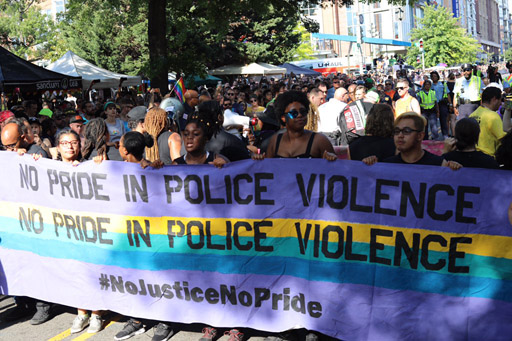 The Capitol Pride parade was interrupted for a short period today as members of No Justice No Pride blocked the parade route over the corporatization of the pride event as well as protesting the participation of the Metropolitan Police Department.

About 3:30 p.m., a couple hundred No Justice protestors were accompanied by pop hits by Beyonce, Lady Gaga, et. al., as they chanted anti-corporate slogans. Later, they joined hands with a chain-like material on P Street between 15th and 16th streets, N.W., in the planned route of the Pride parade. Ten protestors were in the chain with several other activists surrounding them. On one end, a woman chained herself to a fence; the other end to a parked vehicle.

They chanted slogans and clashed vehemently with several bystanders. Police set up a boxed parameter and informed members of the press and others to remain outside. Interactions came close to fisticuffs a few times but as far as the Blade reporters could tell, no violence ensued.

The Blade reports that parade organizers consulted with police and eventually re-routed the parade amounting to a delay of about 90 minutes.

No Justice No Pride’s demands include, per their website:

2) Capital Pride will take a strong position against state violence and end its endorsement of MPD by no longer inviting police officers to march in its parade.

3) Capital Pride will address its neglect of indigenous, Muslim and two spirit communities.

5) Capital Pride will immediately sever all ties with Wells Fargo, Northrop Grumman, Lockheed Martin, BAE Systems, and Leidos and return any funds received from these corporations by donating them to community based organizations.

6) Capital Pride will commit to restructuring, replacing and expanding its board of directors to represent and center the leadership of historically marginalized communities.

Additionally, the Black Lives Matter movement also made an attempt to block the parade: