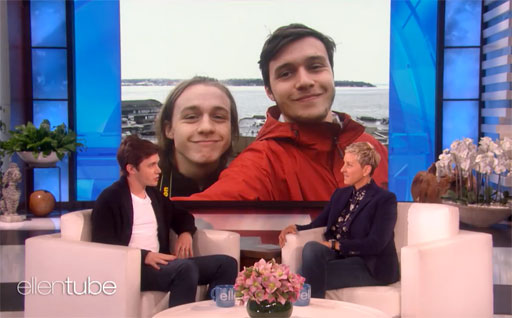 Actor Nick Robinson chatted with Ellen DeGeneres about his new coming-out/coming-of-age film Love, Simon and what it was like to have his brother come out while shooting the movie.

The movie opens this Friday nationwide.

The notices for Love, Simon have been very good. Here’s just a sample of the reviews:

“Simon is a fully realized three-dimensional character, hilariously unsteady when he tries to flirt with a landscaper and a wreck when a friend gets wind of the email exchanges. How refreshing to see a teen boy on a big screen that’s not a sleepy-eyed, monosyllabic jerk just looking to get laid.” — Us Weekly‘s Mara Reinstein

“That this story is coming from a major studio, with the gay kid depicted as an all-American everyboy and main character, rather than a comic sidekick, represents undeniably heartening progress.” — AV Club‘s Jesse Hassenger

“There’s still something undeniably powerful about ‘Love, Simon’s’ ordinariness. After all, there have been dozens of mediocre studio films about straight teen romances over the decades; it says something about the direction of the film industry to finally see one centered on a young gay man.” — The Atlantic‘s David Sims

Out Olympian Gus Kenworthy shared his rave review via Twitter:

Y’all NEED to see Love, Simon! It’s funny, cute, earnest and it will go down in history for breaking the mold on what a coming-of-age romance movie can be! I’m so happy that LGBTQ kids will grow up with this movie available to them. Times they are a-changing. ❤️💛💚💙💜 pic.twitter.com/kpiPc71wBz