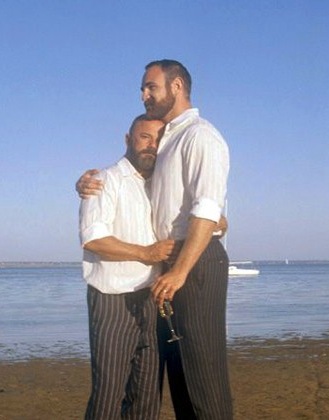 Andrew Sullivan writes an excellent and heartfelt article for Newsweek Magazine regarding marriage equality and his own marriage.

They call it the happiest day of your life for a reason. Getting married is often the hinge on which every family generation swings open. In my small-town life, it was far more important than money or a career or fame. And I could see my grandmother’s point: the very lack of any dating or interest in it, the absence of any intimate relationships, or of any normal teenage behavior, did indeed make me seem just a classic loner. But I wasn’t. Because nobody is.

“In everyone there sleeps/A sense of life lived according to love,” as the poet Philip Larkin put it, as well as the fear of never being loved. That, as Larkin added, nothing cures. And I felt, for a time, incurable.

Yes, the main stumbling block was religion. But we were not talking of religious marriage and were more than eager to insist, as in New York state, on the inviolable religious freedom of churches, mosques, and synagogues to retain their bans on gay marriage. We were talking about civil marriage—and in that respect, religious tradition had long since ceased to apply.

Civil divorce changed marriage far more drastically for far more people than allowing the small percentage who were excluded to be included. And no one doubted an atheist’s right to marry, outside of any church or any religion, just as no one doubted the marriages of childless couples, or infertile ones. In fact, every single argument against marriage equality for gays collapsed upon inspection. And when the data showed that in the era of gay marriage, straight marriage had actually strengthened somewhat, divorce rates had declined, and marriages lasted longer, even those who worried about unintended consequences conceded that the argument was essentially over.

I recommend reading the whole article.