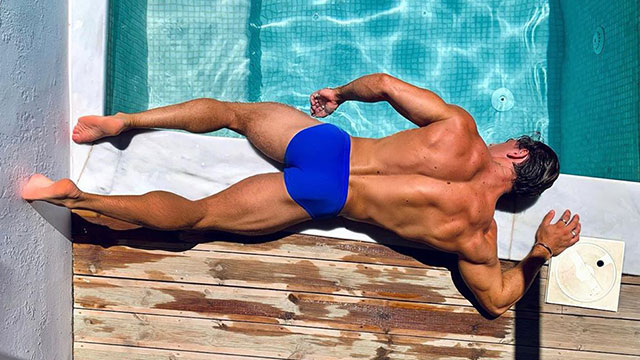 • InstaHunks: In the wake of Jerry Falwell Jr’s fall from grace thanks to a certain ‘pool boy,’ the hashtag #poolboy has been trending on Instagram like the above pic from UK personal trainer Nicholas Budd. #dang

• The Guardian: A new study shows that sports teams that hold Pride Nights and Pride games see a nearly 40% decrease in homophobic language by their players than those in teams that have not held official Pride Nights.

• Men’s Health: This guy made a video of more than 120 guys who look better bald showing before and after pics proving you can go bald like a boss. According to Harry James, the host of the YouTube channel, each of these before and after pictures “marks incredible turning points in all of these people’s lives.”

• Instinct Magazine: Former South Bend Mayor Pete Buttigieg has joined Joe Biden’s transition team. The transition team would help with government appointments and actions during the switchover between administrations were Biden to win the presidency.

• Outsports: After literally coming out of a closet in his coming out video last fall, college football player Jaden Vazquez is now helping LGBTQ athletes by co-leading a new Fordham University student-athlete-support group.

• Pink News: A man in Perth, Australia, has been jailed for five years after he failed to disclose that he was living with HIV to four sexual partners – all of whom later tested positive for the virus. The 30-year-old, who has not been named to protect the identities of his victims, told the four men that he did not have HIV before having condomless sex with them when he was actually diagnosed with HIV in 2012.

• InstaHunks II: Just a couple more #poolboys from the Gram of Insta as we close out Labor Day…

The only way to survive this summer heat 📷 @cucaruchis or @gringa_argentina idk who did . . . Today’s mantra: Work on your goals, surround yourself with like minded people, and be good to yourself #poolboy #honesty #mentalhealth #goodvibes #texasheat #yesthatsatattoo #lifeisbeautiful