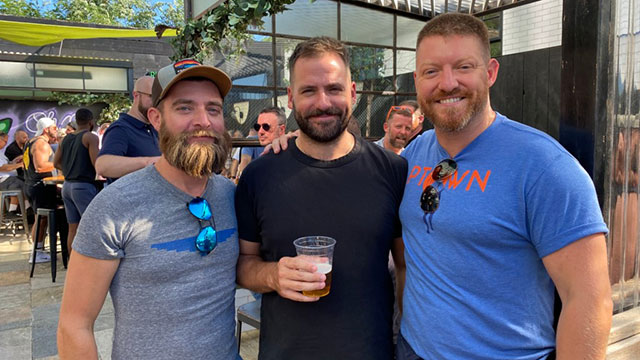 • Instinct Magazine: The Urban Bear event in NYC (above) came roaring back after being cancelled last year. The event has grown from a picnic of 12 people in Central Park to an internationally acclaimed gathering of thousands celebrating the LGBTQ+ Bear community and all who embrace diversity, acceptance, and body positivity.

• U.S. News: 200 people sporting Nazi paraphernalia marched in the Madrid’s  gay-friendly neighborhood on Saturday shouting “Out of our neighborhood” and “Get out of Madrid” prefaced by derogatory words for gay people.

Meanwhile in 🇪🇸 Spain, neonazis were allowed to march in the gay neighborhood of Chueca in Madrid, chanting homophobic abuse ("f*ggots", "sidosos" (~"AIDS-infected"), racist abuse ("you're not Spanish bc you're not white"), as well as "Sieg Heil" nazi salutes👇 https://t.co/g7KUAMH1Qs

• HuffPost: As of Sunday, President Biden has logged nine rounds of golf since taking office, compared with at least 36 for Trump at the same point in his presidency. Obama had golfed 20 times at this juncture, and George W. seven.

• Raw Story: While Trump strolled around a golf course for about a third of his time in office, Biden goes on miles-long bike rides. Which Fox News has to criticize, of course.

• Washington Post: Rudy Giuliani reportedly briefed Trump ally Sen. Lindsey Graham (R-SC) in January on the “evidence” he’d gathered regarding alleged voter fraud in the 2020 election. Not only was Graham unconvinced, but privately he described Giuliani’s documentation as suitable for “third grade.”

• Daily Dance: This groom & members of the wedding party in Brazil make quite an entrance to the wedding service…

GROOM'S GOT MOVES!!!
This groom & members of the wedding party in Brazil make quite an entrance to the wedding service…
Justin Timberlake check this out!🎵🕺🏽🔥(🎥:gustavodurso) pic.twitter.com/mLF1N5SeW6