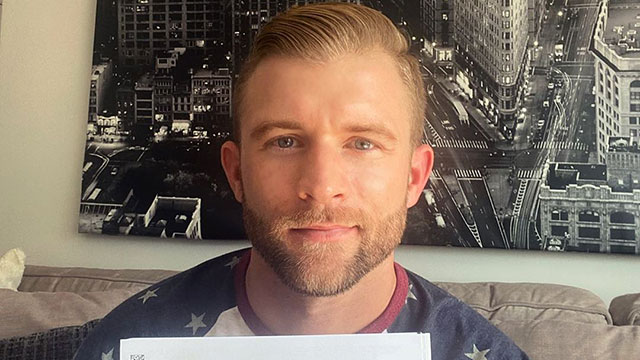 • InstaHunks: Woofy Steve_in_LA (above) reminds us all to VOTE. “It’s finally happening — get out and VOTE like your life depends on it … because it does!!”

• The Advocate: Justice Martin Jenkins, a former NFL player, talks to editor-in-chief John Casey about making history as the first LGBTQ person on the California Supreme Court, coming out and finding love later in life. #GreatRead

• Get Out The Vote: LGBTQ+ civil rights organizations Equality California and Silver State Equality have partnered with actor-activist Billy Porter and ad agency RPA to create a PSA encouraging LGBTQ+ and pro-equality voters alike to make their voices heard in the 2020 election.

• Pink News: A plumber working as a city contractor in Tulsa has been removed from his gig after being caught on a home security camera directing homophobic insults at a gay man and his partner.

• Get Out The Vote II: Mark Ruffalo and more Hollywood stars have an important message for you about voting by mail – so they got naked. Pay attention now…

• Cook Political Report: The Senate race in South Carolina between Sen. Lindsey Graham (R-SC) and Jaime Harrison has been moved to ‘Toss Up.’ “It’s a jump ball at this point,” said one South Carolina Republican strategist. “Jaime is peaking at exactly the right time and he’s got a deluge of money. [Harrison] is blocking every pass there is from Republicans.”

• Out Music: Indie singer/songwriter Skyler Cocco invites us into her dream-like world as she takes a drive to clear her mind in the music video for her pop-synth single, “The Drive,” which Uproxx called “effervescent.”

“The music video is meant to feel as though you’re looking through a colorful lens at an intimate moment of self reflection,” Skyler writes. “I wanted to illustrate the time spent alone with my thoughts while driving down empty roads and wandering through flower fields, knowing you’ll need to face some things when you get home.”