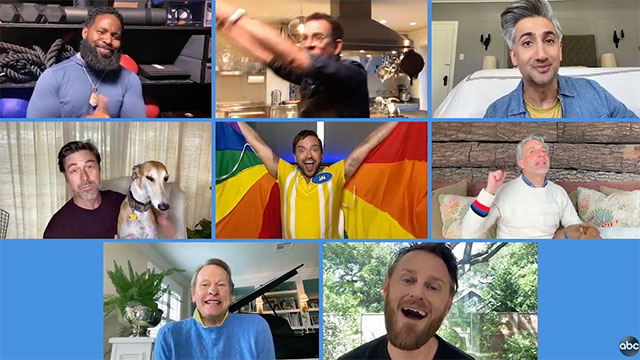 • HRC: On the 8th anniversary of former Vice President Joe Biden’s endorsement of marriage equality, the Human Rights Campaign announced its endorsement of Biden for President. HRC’s Board of Directors, comprised of 26 community leaders from across the nation, unanimously and enthusiastically voted to endorse Biden. “Vice President Joe Biden is the leader our community and our country need at this moment,” said HRC President Alphonso David.

• NY Times: Education Secretary Betsy DeVos on Wednesday issued final rules for how public and private schools must address allegations of sexual misconduct locking in protections for accused students and faculty. The new regulations narrow the definition of sexual harassment and require colleges to hold live hearings during which alleged victims and accused perpetrators can be cross-examined to challenge their credibility.

• Out: On Sunday, May 31 Celebrity Family Feud is set to host the casts of the old and new iterations of Queer Eye (above) in a face-off for charity. The full, original cast will play for The Trevor Project and the new squad (with Karamo Brown swapped out for a featured guest from season 4) will compete for GLSEN.

• Variety: For the past seven decades, the show has always gone on for the Tony Awards, which honor the best Broadway performances and productions. But with the 74th edition being postponed from its planned June 7 date due to the coronavirus, there’s a real chance that the ceremony will be scrapped altogether this year.

• CBS News: At an event marking National Nurses Day at the White House, Donald Trump contradicted Sophia Thomas, the president of the American Association of Nurse Practitioners who works at a community health center in New Orleans, who said the availability of personal protective equipment has been “sporadic.”

At an event marking #NationalNursesDay at the White House, President Trump contradicted a nurse who said the availability of personal protective equipment has been ‘sporadic’ pic.twitter.com/hAKTybRDYp