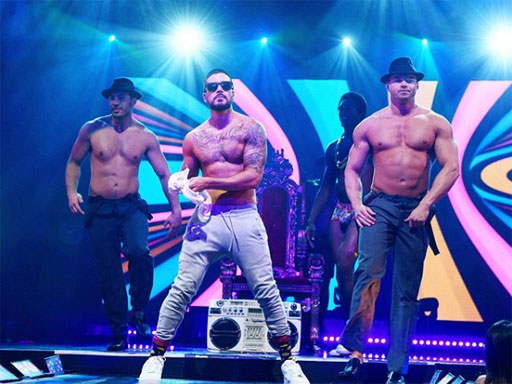 • I caught Vinny Guadagnino’s final performance at Chippendales in Las Vegas this weekend. Let me tell you, the ‘Keto Guido’ killed it – the crowd was insane. That Keto Diet definitely suits him, because he’s ripped AF.

• Three LGBTQ advocacy groups have filed a lawsuit against the Trump Administration for its recent repeal of transgender healthcare rights.

• From his debut EP Loveless, out artist Jake Frost drops his music video for “Undercover,” which offers a brooding exploration of the push/pull of hidden desires and unrequited love.

• During a recent chat on David Letterman’s My Next Guest Needs No Introduction, Ellen DeGeneres shared she was sexually abused by her step-father.

• Seth Rogen told GQ Magazine he really regrets the homophobic jokes in his early movies saying, “I’ve had people come up to me and be like: ‘That made me feel like shit when I was in the movie theatre and everyone was laughing about that.’”

• The producers of musical based on the hit film Magic Mike have cancelled a November Boston tryout engagement after composer Tom Kitt, lyricist Brian Yorkey and book writer Roberto Aguirre-Sacasa left the show over “creative differences.”

• Jack Thompson beat out 67 other contenders to be named this year’s International Mr. Leather becoming the first trans person of color and the second trans person ever in the competition’s 41-year history to win the title.