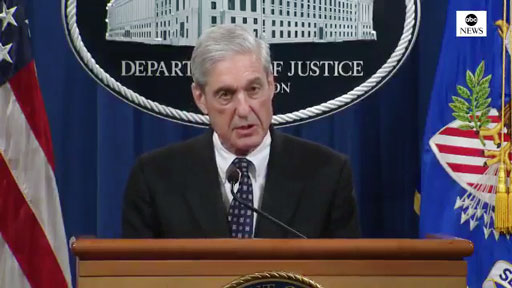 For the first time since the conclusion of the Special Counsel probe into Russian interference in the 2016 election and possible obstruction of justice by Donald Trump, Robert Mueller spoke at the Department of Justice about his team’s report.

Mueller reiterated his office’s conclusion was that there was “insufficient evidence to charge a broader conspiracy” against the Trump campaign in relation to Russian efforts to interfere with the election.

He also made clear that Trump was not cleared of obstruction of justice by the Special Counsel.

“If we had had confidence that the president clearly did not committed a crime, we would have said so. We did not, however, make a determination as to whether the president did commit a crime,” Mueller said about the conclusion of the Russia investigation.

He added that he did not charge Trump with obstruction of justice because Department of Justice policy prohibits charging a sitting president with a federal crime. “Charging the president with a crime was therefore not an option we could consider,” said Mueller.

The key line that will be played over and over.

Robert Mueller: “As set forth in the report, after that investigation, if we had had confidence that the president clearly did not commit a crime, we would have said so.”
Via ABC pic.twitter.com/7rSlmtbDtb

1. I wasn't allowed to charge the President with a crime.

2. I believe he committed crimes, or I would say otherwise.

3. Congress does have the authority to charge him with a crime.— David Jolly (@DavidJollyFL) May 29, 2019

“The constitution requires a process other than the criminal justice system to formally accuse a sitting president of wrongdoing.” —Robert Mueller

Make no mistake: Mueller’s report is an impeachment referral to Congress. pic.twitter.com/jWQjrnxC4U

Robert Mueller made it clear: No exoneration.

Russia attacked our election but there was insufficient evidence to charge a broader conspiracy. 🤦🏼‍♂️

Trump obstructed, but I couldn’t do anything about it because of an antiquated DOJ policy. 🤦🏼‍♂️

I’m not testifying to Congress. 🤦🏼‍♂️

“The Constitution provides means to hold a president accountable outside of the criminal justice system.”

Robert Mueller could not be more clear that he believes Congress needs to step up now, explicitly saying that charging a sitting President with a crime requires a process other than the criminal justice system allows.

There is no other reason for his statement today.