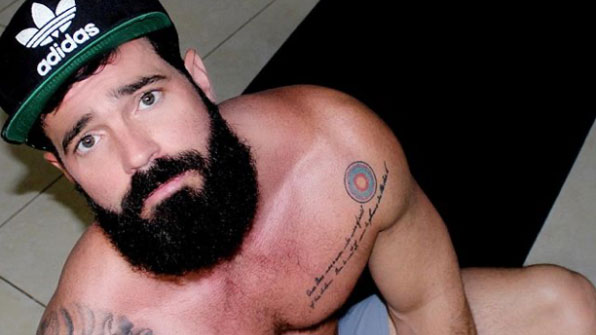 • InstaHunks: Woofy Joe Blizzard (above) is giving you boo-boo face over having to deal with home-gym workouts. Don’t worry, Joe, the gyms will open soon. Follow him on Insta here.

• Deadline: In surprising news, Ruby Rose, the star of the CW’s freshman drama series Batwoman, is leaving the Warner Bros. TV/Berlanti Prods. drama after one season. The series, which already has been renewed for a second season, will continue with the title role getting recast. Rose, an alum of Orange is the New Black, returned to the small screen with Batwoman, playing the first gay lead character — male or female — of a live-action superhero series.

• ABC News: After nine homes over five years, 17-year-old Michael was adopted by Chad and Paul Beanblossom of Pigeon Forge, Tennessee. Despite the coronavirus pandemic shutting down court proceedings, 80 people including friends, family and adoption specialists witnessed the special moment unfold over the Zoom teleconferencing app.

• The Gaily Grind: Matt Belanger, an Emmy-winning news anchor in Minneapolis, Minnesota, was viciously attacked in what police believe was a hate crime fueled by homophobia. He suffered an eye injury which could result in permanent vision damage. Vennie Jerome Williams, 39, was arrested in connection to the assault. While in police custody, authorities said Williams “made statements indicating that he assaulted [Belanger] because he perceived that [he] was homosexual.”

• Politico: More vetting of Tara Reade’s allegations of sexual assault by former Vice President Joe Biden reveals those who have tried to help her in the past were left with an unsavory impression. A number of those who crossed paths with Reade say they remember two things: She spoke favorably about her time working for Biden, and she left them feeling duped.

• The Advocate: CNN anchor Anderson Cooper, appearing on The Ellen DeGeneres Show last Thursday, that along with his newborn son Wyatt, he considers being gay “one of the great blessings” of his life.