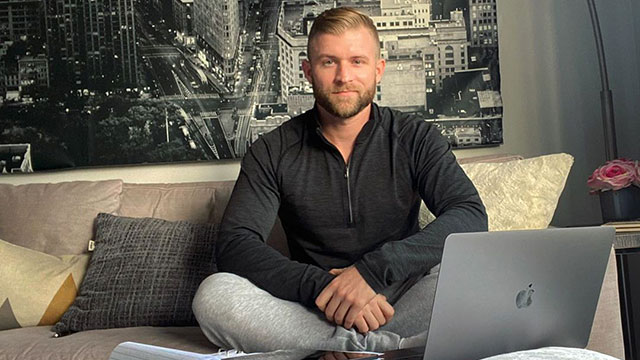 • InstaHunks: Woofy Steve_in_LA (above) looks handsome as ever self-isolating in style as he works from home.

• LGBTQ Nation: At least four LGBTQ people who were at the Winter Party – a huge circuit party held in Miami earlier this month – have been diagnosed with COVID-19. Other partiers have also developed symptoms.

• KIT212: Kenneth’s weekly round-up of the what’s what in local gay rags like Scissor Sister’s lead singer Jake Shears in the latest issue of GRAB.

• Washington Post: U.S. intelligence agencies were issuing ominous, classified warnings in January and February about the global danger posed by the coronavirus while President Trump and lawmakers played down the threat and failed to take action that might have slowed the spread of the pathogen, according to U.S. officials familiar with spy agency reporting.

• CNN: Economists at Goldman Sachs predict next week’s unemployment report will show 2.25 million Americans filing for their first week of unemployment benefits this week — eight times the number of people who filed last week and the highest level on record.

ONR says of the new track: “I liked the idea that ‘being human’ wasn’t a defining quality, but rather a sliding-scale… that you could consider yourself ’not human enough’ to be someone else’s equal. The video is dark, confused, frustrated; it exists within this fantastical alternative reality where the concept of being human is (literally) different from our own.”