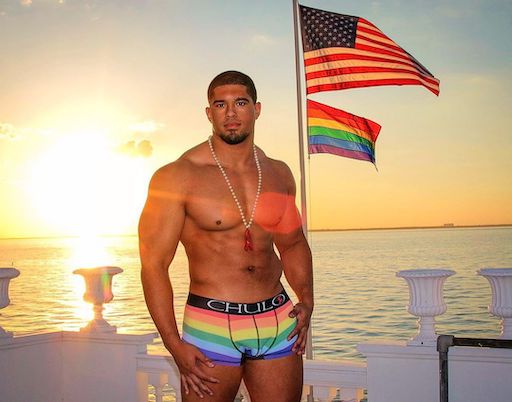 • Today’s InstaHunk lead photo was not even hard to decide. Thanks to out pro-wrestler Anthony Bowens for the awesome inspiration. Caption:

“Happy Pride everyone! Let’s spread the love and focus on things that bring us together as human beings rather than our differences. Let’s remember those that have paved the way for us to live openly and freely. Let’s continue fighting for those who have yet to have that freedom and provide hope that they will soon love in a world where they can. How will you celebrate pride?”

• A homophobic prosecutor in Tennessee (do I even need to continue?) says he doesn’t prosecute domestic violence cases involving same-sex couples because bigot.

• Actor Kevin Spacey appeared in court on Monday in Nantucket for a pretrial hearing where he is accused of groping a male teenager in 2016. Spacey’s lawyers say the teen’s mother deleted text messages from his phone (that could help prove Spacey’s innocence) before turning it over to authorities.

• A UK teenager mowed a giant penis shape in the field along the Stansted Airport flight path as a welcome to Donald Trump as he landed for a state visit to London early Monday morning.

Guess who’s been busy today mowing a stiff message for Trump under the Stansted flightpath… Please share and let’s see how far we can spread the welcome!#climatechange #Trump #welcometrump pic.twitter.com/crnZo5rnDv

• A Florida man is facing a manslaughter charge after deputies say he accidentally shot and killed a woman during an act of foreplay with his handgun. The man told police he and the woman were using the loaded weapon for ‘sexual excitement.’ #smh #straightpeople

• Donald Trump’s campaign held a rally in El Paso, Texas, in February but has refused to pay bills from the city to the tune of more than $470,000. The Trump campaign, using an old Trump tactic, says the city of El Paso is ‘overcharging.’

• The city of Boston, one of the most pro-LGBTQ cities in America, may have agreed to issue a permit for a ‘Straight Pride Parade.’ #IsntThatEveryDay?

Props to everyone supporting the Straight Pride Parade

We know it was tough for you coming out to your parents, getting kicked out of your house, forced to get straight conversion therapy, lost your job, not allowed to marry who you love, and just generally discriminated against

Straight pride parade is just gonna be three guys in cargo shorts in the back of an F-150 one of their bored wives is driving, the Chic-Fil-A cows, and grand marshal Eddie Money who thought he was booked for something else

Floats for the Straight Pride Parade…

ATTN: Straight People. Don’t be upset that you don’t have a pride parade … be grateful you don’t need one!

And SmashMouth takes it for the win:

The last 3,000 years have been a Straight Pride Parade so you can all sit the fuck down.