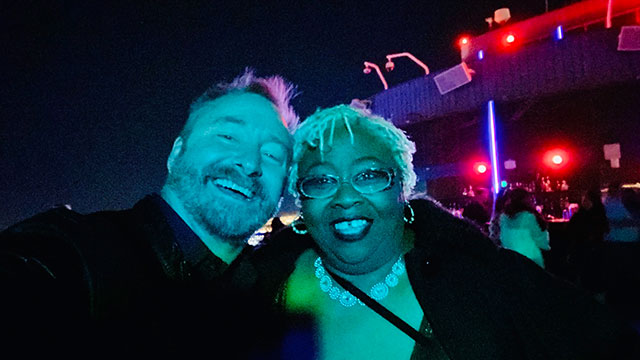 • Throwback Thursday: Amid all this turmoil in the country, I loved chatting with my high school doll Addester (above) last night who came to visit Las Vegas in February. A fun night at Chippendales, and then cocktails at VooDoo on the roof of The Rio. #GoodTimes

• LGBTQ Nation: In May, haters succeeded in striking down LGBTQ nondiscrimination protections passed by the city of Jacksonville, Florida, on a ‘legislative technicality.’ So, this week the City Council voted to restore those protections – correcting the ‘technicalities’ – by a vote of 15-4.

• AP News: In related Jacksonville news, the city has been selected to host the celebration marking President Donald Trump’s acceptance of his party’s nomination for reelection, the Republican National Committee chairwoman said Thursday.

• The Advocate: Residents of Ketchikan, Alaska, have rallied around a same-sex couple denied flowers for their wedding by a local florist. Although the couple had wanted to support a local business, they have now ordered flowers from a Safeway supermarket. Supporters of the couple have donated hundreds of dollars to pay for the flowers. The couple plans to give any leftover funds to charity.

• The Hill: Former Vice President Joe Biden holds a narrow lead over Donald Trump in Florida, according to a new poll released by Republican polling firm Cygnal on Thursday. The survey shows Biden with 47 percent support among likely voters in the Sunshine State as Trump trails by roughly 3 points at around 44 percent.

• Reuters: The United States surpassed 2 million confirmed cases of the novel coronavirus on Wednesday, as rising hospitalizations in states such as Texas, Arizona, and North Carolina prompt fears about reopening the country. The U.S. has now reported nearly 113,000 deaths from COVID-19, the disease caused by the novel coronavirus. Health authorities in Texas on Wednesday reported a record number of COVID-19 hospitalizations for the third consecutive day. #SoMuchWinning