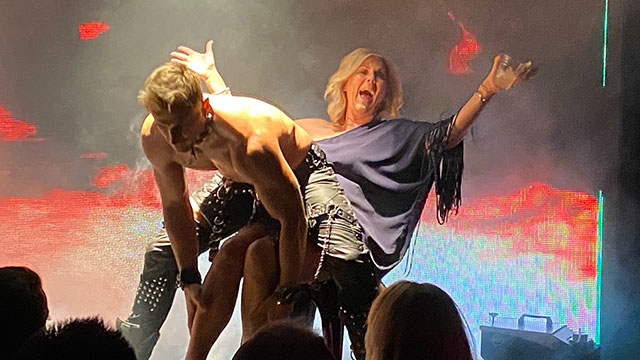 • Uncensored The Show: I hope everyone’s Hump Day was as fab as the woman above attending Uncensored the Show here in Las Vegas.

• Irish News: A gay rights group is planning a legal challenge to a ban on sex and condoms at Maghaberry all-male prison in Northern Ireland.

• NowThis News: Eric Adams has won New York City’s Democratic primary making him a near-guarantee to be the next mayor of the city.

• LGBTQ Nation: A new study analyzed records for 83,000 adults being treated for HIV between 1999 and 2017 and compared them to a similar group of people without HIV. For those who started treatment from 2011 to 2017, the difference in early death rates for those with HIV has dropped to just 2.7%.

• Pink News: A gay son has shared a poignant tribute to his two adoptive gay dads, who both tragically died of AIDS just five days apart. “They never got a chance to see the men we are today but they cared for us very much and gave us a life that we wouldn’t have known otherwise. It’s incredible even now, after all these years, I can still feel what it felt like to be loved that much.”