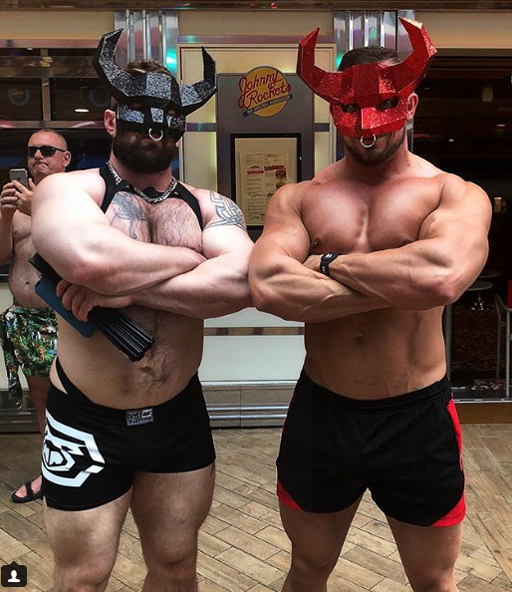 • One last shot from the Atlantis Cruise I was on last week. This from Preston Brock previewing his costume for the “Call of the Wild” dance party. #BullsArePrettyWild

• A transgender soldier will be the guest of Congressman Joe Kennedy (D-MA) at Donald Trump’s State of the Union address.

• Josh Weed, a gay Mormon who in 2012 told the world he was happily married to a woman, has announced his opposite-sex marriage has ended in divorce saying that a platonic marriage is no substitute for true intimacy and romantic love. The couple also issued an apology to the LGBT community:

We’re sorry to any gay Mormon who even had a moment’s pause as they tried to make the breathtakingly difficult decision that I am now making—to love myself fully for exactly what God made me—because of our post. We’re sorry for any degree that our existence, and the publicity of our supposedly successful marriage made you feel “less than” as you made your own terribly difficult choices. And we’re sorry if our story made it easier for people in your life to reject you and your difficult path as being wrong. If this is you, we want you to know: you were right. You did the correct, brave thing. You are ahead of me in the sense that you have progressed through things I have yet to progress through. You listened to your gut and to God and did a brave, brave thing. Now I’m following your example.

• House Republicans have voted to release a Republican penned “memo” meant to discredit the ongoing investigation by Special Counsel Robert Mueller even though the Justice Department recommending examing the document first.

• NBC News reports that Donald Trump angrily called now-fired Deputy Director of the FBI Andrew McCabe when he saw dismissed FBI Director James Comey taking a federal plane home to Washington from Los Angeles after being sacked. During the call, Trump allegedly asked McCabe how his wife felt being a “loser” after falling short in her for state office in Virginia. #WhatEverHappenedToClass?

• Check out this moving coming-out story by BBC correspondent and grassroots footballer from the UK, Richie Anderson, to his teammates:

‘It’s time to tell my team-mates I’m gay’. We’re really proud of our presenter @richie_anderson who appeared on the One Show last night. Watch the full film about homophobia in grass roots football here https://t.co/JXex5cDdCc pic.twitter.com/H3itc5rMj7