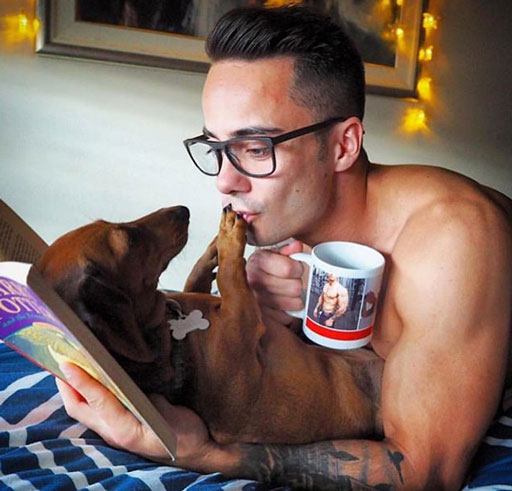 • This is what it’s like (above) trying to read in my house (via HotDudesWithDogs Instagram)
• The number of hate groups in the United States has hit the highest level in two decades. Any guess why?
• Prosecutors say a Coast Guard officer and Trump supporter was plotting to kill prominent journalists and politicians viewed as opponents of Donald Trump.
• Text messages sent by Jussie Smollett were read aloud in court today which indicated the Empire star collaborated with the two men who allegedly took part in the now-infamous ‘attack.
• The five-member board of elections unanimously called for a new election in North Carolina’s 9th congressional district where voting irregularities in Bladen and Robeson counties appeared to benefit the Republican candidate, Mark Harris. Yesterday, Harris’ son testified that he warned his father about a campaign worker who tampered with mail-in ballots.

• Michele Crider, a waitress in Indiana, shared her experience of a restaurant guest who not only didn’t tip her, he wrote “I don’t tip fags” on the check.

“Why did you feel the need, sir, to write that on there? If you don’t like gay people…that’s whatever…but to say something like that? I’m a mother. I work my butt off, sir, to pay my bills, to put my son into a good school and pay that tuition.”

“I don’t know what happened to you in your life to make you such a miserable person sir, but I feel very sorry for you.”

“You didn’t win – you’re the coward,” said Crider before adding one last tip to the bigot.