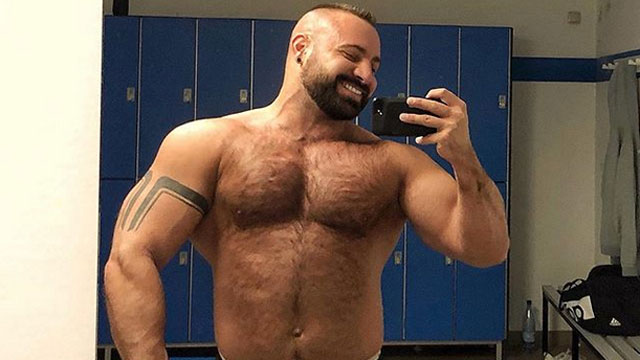 • InstaHunks: Fitness guy Nik (above) says “six-packs are overrated – especially after Christmas!” I second that notion 🙂

• Instinct Magazine: A Manhattan school teacher says he was fired for being gay and for standing up for a non-binary gender-nonconforming student.

• Hulu: A trailer has been released for the latest installment of Hulu’s Into The Dark, a monthly horror event series. Each feature-length installment is inspired by a holiday. The latest episode – Midnight Kiss – stars Scott Evans and premieres on December 27. According to the official synopsis, “A group of longtime gay best friends head to a beautiful desert home to celebrate New Year’s Eve. One of their annual traditions is to play MIDNIGHT KISS, a sexy but ultimately dangerous challenge to find that special someone to help you ring in the New Year. As friendships have grown strained with secrets, jealousy and resentment, the group faces another challenge when a sadistic killer wants in.”

• Out: Dame Judi Dench says her “Deuteronomy” in the now-infamous film version of Cats is transgender.

• CNBC: Trump supporters were outraged to hear a version of Home Alone 2 aired on Canada’s CBC network which omits Donald Trump’s cameo in the film. Chuck Thompson, the CBC’s head of public affairs, said in a statement that the edits to the film “were done in 2014 when we first acquired the film and before Mr. Trump was elected president.”

• Instagram: Madonna canceled her final ‘Madame X’ tour date in the U.S. due to “indescribable” pain.

I was in tears from the pain of my injuries, Which has been indescribable for the past few days With every song I sang, I said a prayer that I would make it to the next and get thru the show. My prayers were answered, And I made it. I consider myself a warrior I never quit, I never give in, I never give up!! However this time I have to listen to my body And accept that my pain is a warning I want to say how deeply sorry I am to all my fans. For having to cancel my last show I spent the last two days with doctors Scans, ultra sounds, Xrays Poking and probing and more tears. They have made it very clear to me that if l’am to continue my tour— I must rest for as long as possible so that I don’t inflict further and Irreversible damage to my body. I have never let an injury stop me from performing but this time i have to accept that there is no shame in being human and having to press the pause button………….. I thank you all for your understanding, love and support. As the Words to Batuka go……….. It’s a Long Road……….Lord Have Mercy🙏🏼. Things have got to change. And they will because MADAME ❌. is a fighter!! Happy Holidays to Everyone ♥️🎄 #madamextheatre #thefillmoremiamibeach @orquestra.batukadeiras.pt