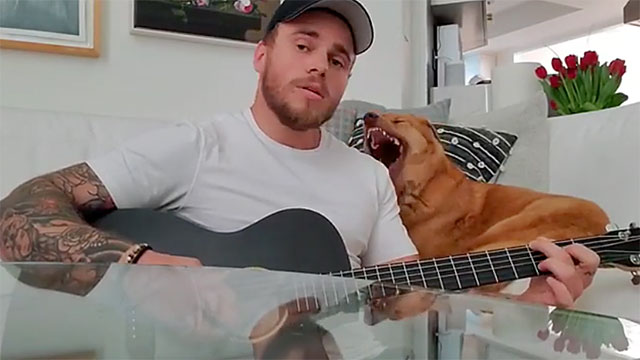 • New York Times: National Institutes of Health scientists in Montana last month inoculated six rhesus macaque monkeys (considered the closest equivalent to humans) with single doses of a vaccine developed by the Oxford University’s Jenner Institute. The animals were then exposed to heavy quantities of the virus that is causing the pandemic — exposure that had consistently sickened other monkeys in the lab. But more than 28 days later all six were healthy.

• InstaHunks: I spent about a year studying the guitar when I was younger, and I was terrible. Woofy Gus Kenworthy (top) has really learned a lot in just two months. Color me impresssed. But it looks like his best fur pal Birdie isn’t feeling it. Watch below.

I’ve spent the past two months trying to learn the guitar and my dog is… honestly not very impressed.

• Reuters: A study of more than 1400 LGBT+ women – one of the largest of its kind – found 37% of lesbian mothers in the UK suffered discrimination from other parents, while the same number’s children were victimized.

• Bloomberg News: Donald Trump indicated today he’s considering withholding COVID-19 financial assistance from blue states unless they agree to do away with sanctuary cities. Note: states like California and New York, which have sanctuary cities, already send much more to the federal government than they receive.

Trump suggests any relief for states hit hard by COVID will require ending “sanctuary city” policies and turning residents over to ICE. pic.twitter.com/BSxqfPu0id

• Atlanta Journal-Constitution: Two people in Georgia drank liquid cleaning products over the weekend in misguided attempts to ward off COVID-19, according to the Georgia Poison Center. Both men had histories of psychiatric problems and are expected to recover.

• The Gaily Grind: ABC News correspondent Will Reeve, the son of the late “Superman” actor Christopher Reeve, accidentally revealed to the nation that he wasn’t wearing any pants while doing a live report on “Good Morning America” from his home.

The 27-year-old’s camera was angled down and revealed that the correspondent was not wearing any pants as he sat on a stool immediately generating reactions on social media after the moment on “Good Morning America” went viral.

*in the most hilariously mortifying way possible https://t.co/2NQ85QEJVr