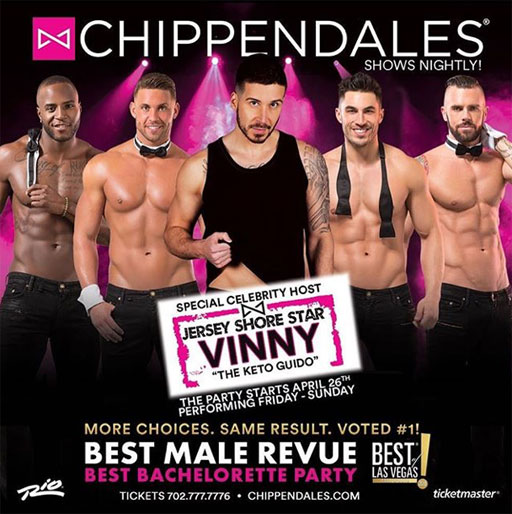 • I hear MTV Jersey Shore star Vinny Guadagnino, who joins the Chippendales here in Las Vegas as Celebrity Guest Host April 26 through May 26, is selling a LOT of tickets. And yes, men are always welcome at Chippendales.

• A new Rasmussen Reports national survey finds that 59% of likely U.S. voters say they would personally be willing to vote for an openly gay president; 30% would not, 12% are not sure.

• A 28-year-old man in Mississippi was beaten so severely – his jaw was shattered in two places – because his assailants thought he was gay.

• 1995 drag classic To Wong Foo, Thanks for Everything, Julie Newmar is being re-released for Pride Month on Blu-Ray with special features including deleted scenes.

• Christian home schooling parents, David and Louise Turpin, who beat, starved and held 12 of their children captive inside their home, were sentenced Friday to life in prison.

• The music and the magic of Elton John’s incredible life comes to the big screen in upcoming musical fantasy biopic, Rocketman.

Watch as the team behind the film discusses Elton John’s journey from prodigy to icon in this special look at Rocketman, in theatres May 31.