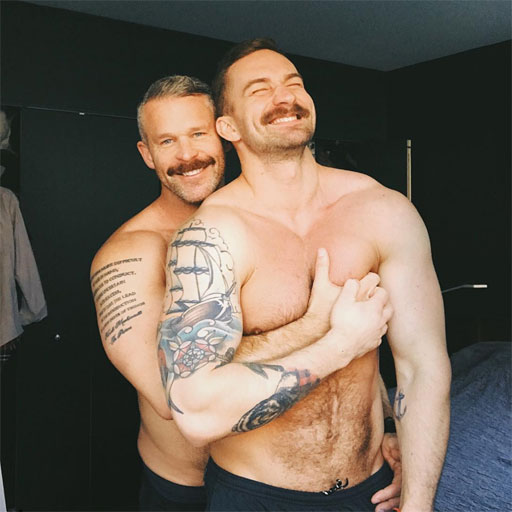 • Since its Hump Day I’m starting this round with two – count’em two – InstaHunks as there’s a birthday in the house as Alex Abramov celebrates #31 with bf Brett Miles (above).

•  Illinois lawmakers have advanced a bill that would require public schools to include teaching the accomplishments of LGBT folks in history classes much like current laws that require students learn about other groups such as African-Americans, Hispanics and Asian-Americans.

• John Sherman at Buzzfeed has penned an interesting essay wondering if gay media is still focusing on gay acceptance (i.e. Love, Simon) instead of celebrating queer difference? Sherman brings up some points I hadn’t considered. Def worth the read.

• The raid on Donald Trump’s personal lawyer’s office and home specifically looked for documents regarding the now infamous “Grab’em by the pussy” Trump video from Access Hollywood. Political experts posit the investigation may be looking into payments to silence women who might have affected Trump’s electoral chances in 2016.

• A federal judge in Texas ruled last week that Title VII of the U.S. Civil Rights Act of 1964 which bans sex discrimination, also bans discrimination based on sexual orientation and gender identity.

• This week we got our first look at Anything, a story about love and acceptance that follows widower Early (John Caroll Lynch) after his move to LA in the aftermath of the death of his wife. Early finds an unlikely friend in his neighbor, Freda, who is a transgender sex worker.

While the film’s premise is welcome, folks have raised concerns about the casting of Matt Bomer, a cisgender man, as the trans character Freda.