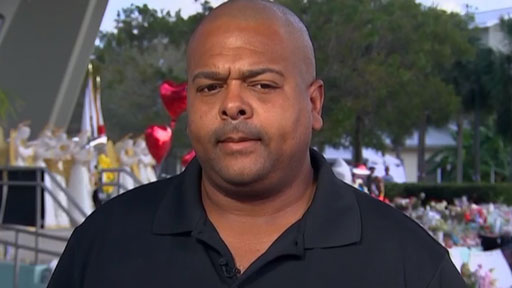 Donald Trump’s solution to school shootings is to arm teachers in the class room.

Other than a gung-ho teacher leaving his gun in a bathroom for a stranger to find…?

The Miami Herald has the details:

Not the most normal sight: a gun left in the bathroom stall. But that’s exactly what went down on Sunday in a men’s room at the Deerfield Beach Pier.

The circumstances of how the Glock 9mm got there are unusual.

According to the Broward Sheriff’s Office, the weapon was left by Sean Simpson. If his name sounds familiar, he’s the teacher at Marjory Stoneman Douglas who said he’d be willing to arm himself while on duty.

According to the sheriff’s office report, Simpson told deputies he’d left his gun by accident. By the time the chemistry teacher realized his mistake, the Glock was already in the hands of a drunk homeless man who had picked it up and fired. The bullet hit a wall.

Simpson was able to grab the gun away from the vagrant, Joseph Spataro, who was charged with firing a weapon while intoxicated and trespassing. As for the MSD teacher, he was arrested and charged with failing to safely store a firearm, a second-degree misdemeanor.

Simpson got slapped with a second degree misdemeanor for failing to properly store a firearm.

The Broward School Board, which includes Marjory Stoneman Douglas High School, unanimously rejected the state’s new program to arm school staff this week. The funds will be used for more resource officers instead.