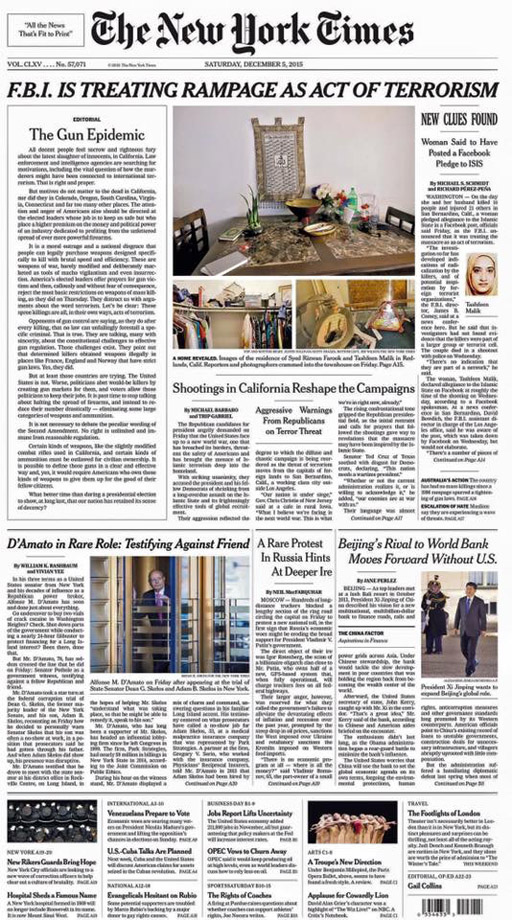 Not to be outdone by the New York Daily News, the New York Times runs it’s first front page op-ed since 1920 calling for gun control laws.

It is a moral outrage and a national disgrace that civilians can legally purchase weapons designed specifically to kill people with brutal speed and efficiency. These are weapons of war, barely modified and deliberately marketed as tools of macho vigilantism and even insurrection. America’s elected leaders offer prayers for gun victims and then, callously and without fear of consequence, reject the most basic restrictions on weapons of mass killing, as they did on Thursday. They distract us with arguments about the word terrorism. Let’s be clear: These spree killings are all, in their own ways, acts of terrorism.

Opponents of gun control are saying, as they do after every killing, that no law can unfailingly forestall a specific criminal. That is true. They are talking, many with sincerity, about the constitutional challenges to effective gun regulation. Those challenges exist. They point out that determined killers obtained weapons illegally in places like France, England and Norway that have strict gun laws. Yes, they did.

But at least those countries are trying. The United States is not. Worse, politicians abet would-be killers by creating gun markets for them, and voters allow those politicians to keep their jobs. It is past time to stop talking about halting the spread of firearms, and instead to reduce their number drastically — eliminating some large categories of weapons and ammunition.

It is not necessary to debate the peculiar wording of the Second Amendment. No right is unlimited and immune from reasonable regulation.