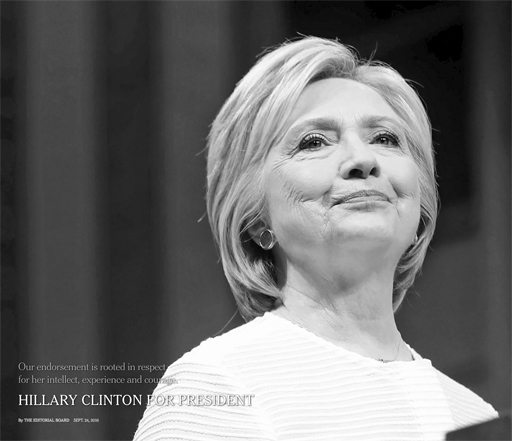 I’m certain it’s no surprise to Republican Donald Trump that his hometown paper doesn’t see him as the future leader of the free world. In fact, the Times refers to him as “the worst nominee put forward by a major party in modern American history.” (bolding is mine).

The editors focus here on the reasons why voters should consider Clinton this election cycle.

From the editorial board of the New York Times:

In any normal election year, we’d compare the two presidential candidates side by side on the issues. But this is not a normal election year. A comparison like that would be an empty exercise in a race where one candidate — our choice, Hillary Clinton — has a record of service and a raft of pragmatic ideas, and the other, Donald Trump, discloses nothing concrete about himself or his plans while promising the moon and offering the stars on layaway. (We will explain in a subsequent editorial why we believe Mr. Trump to be the worst nominee put forward by a major party in modern American history.)

But this endorsement would also be an empty exercise if it merely affirmed the choice of Clinton supporters. We’re aiming instead to persuade those of you who are hesitating to vote for Mrs. Clinton — because you are reluctant to vote for a Democrat, or for another Clinton, or for a candidate who might appear, on the surface, not to offer change from an establishment that seems indifferent and a political system that seems broken.

Running down the other guy won’t suffice to make that argument. The best case for Hillary Clinton cannot be, and is not, that she isn’t Donald Trump.

The best case is, instead, about the challenges this country faces, and Mrs. Clinton’s capacity to rise to them.

The Times goes on to list Hillary’s considerable experience including her “substantial” achievements as secretary of state, her work on behalf of 9/11 first responders’ health care, her efforts in the Senate Arms Forces Committee, her “unusual capacity to reach across the aisle,” her life-long record of service to children and families, and her “reputation for grit and bipartisan collaboration.”

The editorial board notes that Hillary’s career spans the post-Cold War era of the 90s to today’s ever-changing political landscape of a world “darkened” by the rise of terrorism.

Mrs. Clinton’s service spans both eras, and she has learned hard lessons from the three presidents she has studied up close. She has also made her own share of mistakes. She has evinced a lamentable penchant for secrecy and made a poor decision to rely on a private email server while at the State Department. That decision deserved scrutiny, and it’s had it. Now, considered alongside the real challenges that will occupy the next president, that email server, which has consumed so much of this campaign, looks like a matter for the help desk. And, viewed against those challenges, Mr. Trump shrinks to his true small-screen, reality-show proportions, as we’ll argue in detail on Monday.

Through war and recession, Americans born since 9/11 have had to grow up fast, and they deserve a grown-up president. A lifetime’s commitment to solving problems in the real world qualifies Hillary Clinton for this job, and the country should put her to work.