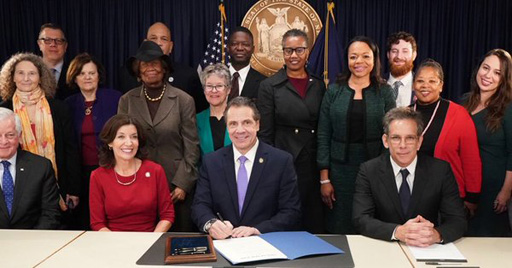 New York Gov. Andrew Cuomo announced today that he has signed new voting legislation into law that brings his state “into the 21st century,” including (finally) allowing for eight days of early voting before an election.

Democrats have tried for years to enact early voting laws, but have been blocked by a Republican-controlled Senate until this new legislature.

The collection of voting reforms, marking the first bills passed by the new state legislature, will:

• Establish early voting: Enacting early voting will make voting more convenient for voters whose professional or family obligations make it difficult to physically get to the polls, as well as reduce waiting times and ease logistical burdens for poll workers.

• Synchronize federal and state elections: New York State currently holds separate primary elections for state and federal elections. With the addition of a presidential primary every four years and a general election, this means that in some cases New York is holding four different elections in a year. This can be confusing to voters and wastes administrative resources. This bill will unify the federal and state primaries once and for all and ensure that voters only go to the polls once to choose their nominees.

• Provide for pre-registration for minors: New Yorkers are not permitted to register to vote unless they will be 18 years of age by the end of the year, and by the date of the election in which they intend to vote. This bill will allow 16 and 17-year-olds to pre-register to vote, meaning that a voter will automatically be registered on his or her 18th birthday.

• Universal transfer of registration: When New Yorkers move to a different county, their voter registration does not move with them. This requires the voter to re-register with his or her new local board of elections as if he or she were registering for this first time. This bill will ensure that when a voter moves elsewhere in the state, his or her voter registration will seamlessly go with them.

• Close the LLC Loophole: This bill will close the LLC loophole by limiting political spending by an LLC to a total of $5,000 annually, which is the same limit as corporations. The bill will also require the disclosure of direct and indirect membership interests in the LLC making a contribution, and for the contribution to be attributed to that individual.