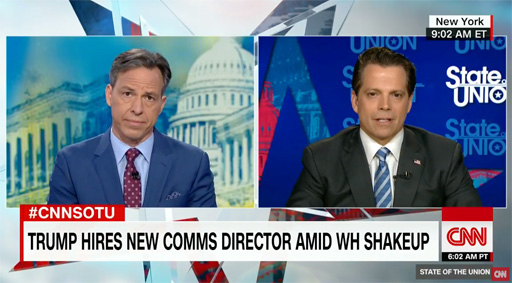 The new White House Communications Director, Anthony Scaramucci, sat down for a lengthy chat on CNN’s State of the Union with Jake Tapper this morning.

Started out very polite, but Scaramucci quickly became combative, which is certainly going to please his boss.

At one point, Scaramucci offered the opinion of an anonymous person on Russia. When pushed by Tapper, the new comm director admitted that it was President Trump.

“There’s a lot of misinformation,” Scaramucci said, dismissing the conclusion of U.S. intelligence agencies. “Somebody said to me the other day — I don’t want to say who — if the Russian actually hacked the this situation and spilled out those emails, you would have never seen it. You would have never had any evidence of them. Meaning that they’re super confident in their deception skills and hacking.”

“Wait, wait, wait,” Tapper interrupted. “I don’t know who this anonymous person is.” “How about it’s the president, Jake,” Scaramucci revealed. “He called me from Air Force One and basically said to me, ‘This is — maybe they did it, maybe they didn’t do it.’”

Props to Jake Tapper for trying to keep Scaramucci on topic.

A few other points gleaned from Mr. Scaramucci’s appearance:

• We now know he likes to remind folks he went to Harvard Law School.

• He hasn’t met a superlative, in regard to Trump, he doesn’t like.

• He enjoys dropping lines like, “The president called me from Air Force One.”

• Scaramucci says once he has his security clearance, he’ll “take a look” at the intelligence and decide for himself if he believes Russia interfered in the 2016 election.

It’s clear to see why Trump would like a guy like Scaramucci. He constantly praises his boss; he’s much more smooth than Sean Spicer; he’s a middle-class guy who created his own success – a narrative Trump would love to believe about himself; and he looks like what Trump probably thinks he sees when he looks in the mirror.

Here’s the full segment. I encourage you to watch.