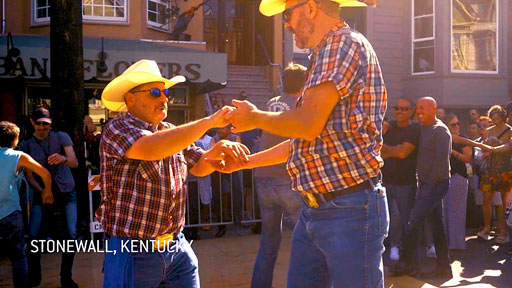 In his latest project, filmmaker Leo Herrera posits, “If AIDS never happened, who would we be?”

The new web series Fathers imagines in fictional documentary-style an LGBTQ utopia called ‘Stonewall Nation,’ a collection of queer communes in a parallel universe where the AIDS crisis never happened.

Instead of the LGBTQ community being decimated by disease and seeing the nascent gay rights movement stymied by rising anti-LGBTQ animus in the 1980s, Herrera envisions gays running for president, unconstrained by discrimination and disease, living openly across the country.

The 1980s were a golden age for the gay population.
It was a decade defined by our dominance of the arts, victories in politics
and groundbreaking developments in healthcare.

Relying on LGBTQ historians for accuracy, the characters/people featured in Fathers are actual gay leaders of the past as well as survivors, friends, and family members.

The pilot episode (below) is just the beginning as Herrera plans future installments to explore “the election and presidency of gay president Vito Russo (the real AIDS activist who was killed by the disease in 1990), and will be a direct reflection on the political climate today. They will also deal with the plight of gay seniors and the sexuality of modern queer culture.”

The name ‘Stonewall Nation’ comes from an actual group of queer separatists who hoped to establish their own city in Alpine, California, in 1970. Without proper resources, the plan was never implemented.

You can help fund the project here, and check out the first episode below: