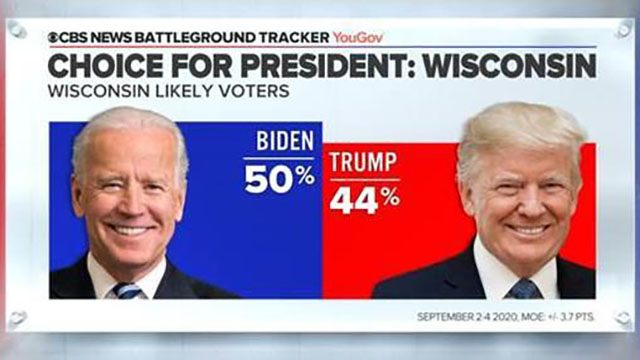 According to the survey, 50 percent of likely Wisconsin voters say they plan to vote for Biden while 44 percent indicated Trump will get their vote.

With the ongoing protests across the country, Biden is apparently seen as a more calming figure while Trump is viewed as ‘encouraging’ the angry situations.

Though neither candidate gets rave reviews for what they’ve said about the demonstrations, Biden is seen by more as trying to calm the situation, while the president is perceived by slightly more as encouraging fighting, rather than calming things down. And the larger notion that violence could come to “the suburbs” finds little concern among those who actually reside in the suburbs.

The RealClearPolitics average of polls in Wisconsin puts Biden ahead by 4.4 percent. Head over to CBS News for a more in-depth look at the recent polling results.