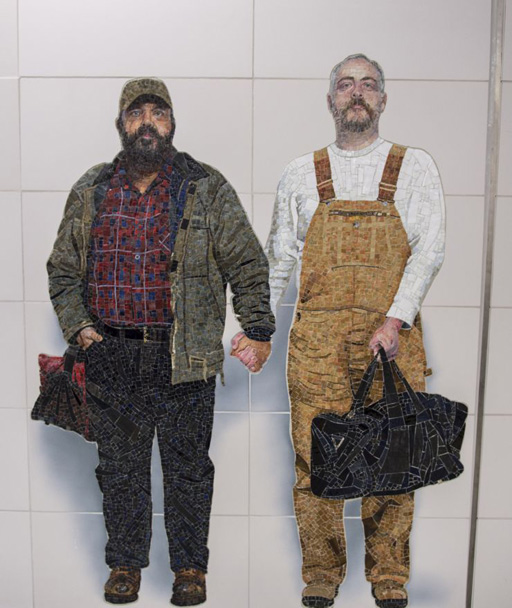 After years and years of construction and delays, NYC’s 2nd Avenue subway will finally open on January 1. As with other subway stations throughout the city, the new stations will feature public art, with the 72nd line showcasing the work of Chuck Close, Vik Muniz, Jean Shin and Sarah Sze.

The 72nd street station will feature a mosaic mural by Vik Muniz called “Perfect Strangers” which depicts “the different people that riders are likely to encounter on their daily commutes” according to the AP, and among them is the above picture of a same-sex couple.

“It was like winning the lottery,” Thor Stockman, 60, said of finding out that he and his husband of 3 ½ years, Patrick Kellogg, were going to be part of artist Vik Muniz’s “Perfect Strangers,” a series of life-size mosaic portraits of everyday New Yorkers gracing the walls of the new subway station at 72nd Street. But “part of me wishes that it wasn’t a rarity, that it wasn’t remarkable.”

Muniz said it made sense to include the two men in a project intended to show the different people that riders are likely to encounter on their daily commutes.

Jonathan David Katz, an expert in queer art history, said he could find no other example of a permanent, non-political LGBTQ public artwork in New York City. He mentioned George Segal’s “Gay Liberation Monument” near Stonewall Inn, the site of the 1969 riots that launched the gay rights movement. But that work, featuring two men standing and two women sitting, is expressly commemorative of a political moment.