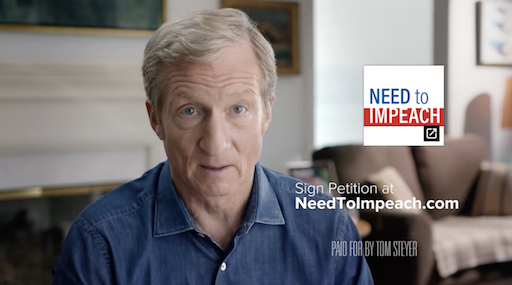 Check out this new ad I noticed yesterday on CNN calling for the impeachment of Donald Trump.

California billionaire Tom Steyer, who spent more than $75 million during the 2016 election to get millennials involved in progressive causes, has produced the spot as the part of a $10 million campaign calling for President Donald Trump’s impeachment.

“A Republican Congress once impeached a president for far less. And today, people in Congress and his own administration know that this President is a clear and present danger who is mentally unstable and armed with nuclear weapons,” says Steyer.

Note the tone of Steyer’s voice. This is not a wild, reckless rant.

I appreciate the sentiment but, of course, articles of impeachment will not be forthcoming from a Republican-controlled House of Representatives.

Now, should the Dems regain control of the House in next year’s mid-term elections, who knows?

Watch the spot below.