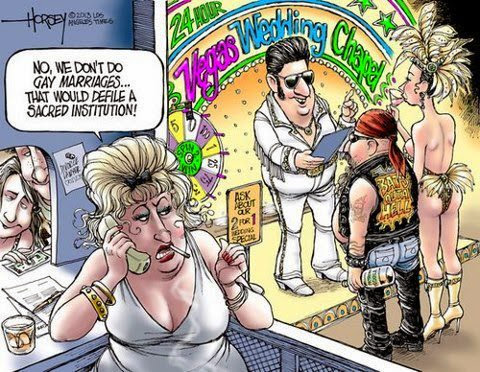 After the 9th Circuit Court of Appeals found Nevada’s same-sex marriage ban unconstitutional, gay and lesbian couples have been legally allowed to marry in the state.

But according to a recent news investigation, some Las Vegas wedding chapels are refusing to perform the nuptials based on religious beliefs.

From 8 News NOW in Las Vegas:

After making calls to about 15 wedding chapels, 8 News NOW found that several of them refused to perform wedding ceremonies for same-sex couples.

The Elvis Wedding Chapel, which welcomes traditional and Elvis-themed weddings, said they wouldn’t marry same-sex couples. However, when the 8 News Now cameras were rolling as we tried to get their stance on camera, they refused to open the door.

“I’m not going to tell you,” David with the Elvis Wedding Chapel said, “It just — there is no story here.”

Dolly Deleon, the owner of the Vegas Wed Chapel, said she’s a born-again believer in Jesus.

She did not know that a couple who is turned away based on race, sex, or sexual orientation could file charges against her. That could then lead to a misdemeanor arrest.

“I would be a hypocrite if I said I’m a Bible-believing person and yet I would perform marriage that believe is solely against God’s law,” Deleon said.

Because nothing says “sanctity of marriage” like being married by an Elvis impersonator, right?

The problem for businesses like Vegas Wed Chapel is that in 2011, sexual orientation was added to the state’s public accommodation law making it a misdemeanor offense for businesses to discriminate against gays and lesbians.

“The difference between a church and a place of worship and a wedding chapel, is that a wedding chapel is a business so that is covered under the Public Accommodations Law of Nevada,” said Tod Story, ACLU.

“Any Las Vegas wedding chapel that operates as a business is covered under Nevada’s public accommodations law and is not allowed to discriminate against same-sex couples seeking a wedding ceremony, or any other couple for that matter,” says Tod Story, executive director for the ACLU of Nevada. “Currently, the way the law is written, it’s a misdemeanor crime. Any couple refused service has to file a complaint with the state. … [Vegas Wed] has turned away couples. I don’t know if [those couples] even knew there was a law that protected them.”

The news isn’t all bad though. Gay partners Jamie Richards and Ron DeCar own and operate the Viva Las Vegas chapel in Las Vegas, and have in the business of same-sex ceremony packages since 1999, even though they were not legally binding.

“From Day One we were doing commitment ceremonies,” Richards told the Daily Beast. “I worked at the MGM (Grand) years ago when you literally went to board meetings and stuff, and nobody could know you were gay. And now all the hotels embrace the gay population, and they embrace the gay dollar. It’s got to help the economy.”