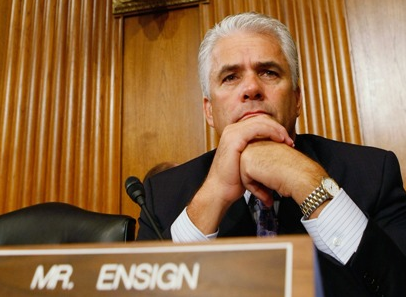 Nevada Senator John Ensign announced today he will not run for re-election in the coming political cycle.

From the Washington Post: “There are consequences to sin,” Ensign declared at a news conference in Las Vegas. He said he did not want to put his family though an “exceptionally ugly” campaign.

“I thank Senator Ensign for his nearly two decades of public service,” said National Republican Senatorial Committee Chairman John Cornyn (R-Texas) in a statement. “Next year’s Senate race in Nevada will now come down to a clear choice between two competing visions for our country.”

Ensign, was first elected to the Senate in 2000 after two terms in the House.

The retirement decision comes in the wake of an ongoing Senate ethics committee investigation into whether Ensign acted improperly in an extramarital affair with Cynthia Hampton, who worked for Ensign’s political committees and whose husband, Doug, was a top legislative staffer for Ensign.

In the spring of 2008, Ensign, trying to repair his marriage, dismissed both Hamptons from his payroll. His parents, casino magnates in Las Vegas, issued nearly $100,000 in checks to Doug and Cynthia Hampton and the Hampton children, what were officially termed as gifts.

In the months that ensued, Ensign allegedly helped Doug Hampton land a lobbying job back in Nevada and then also helped him sign clients and get them access to officials in Washington. This came during the “cooling-off” period for Hampton, when he was legally barred from lobbying Ensign.

In early 2009 Hampton became upset with the state of his employment and asked Ensign for more money, something that Ensign’s circle of advisers have privately called blackmail. Sen. Tom Coburn (R-Okla.), once a close friend and former roommate of Ensign’s, tried to negotiate a settlement with Hampton and Ensign, believed to be worth several million dollars.

Republican strategists will probably consider this a good thing. Rep. Dean Heller, who had been preparing for a primary challenge to Ensign, will now almost certainly run, and the party establishment will do everything in its power to clear the primary for him.

Democrat Rep. Shelley Berkley has been the most obvious choice to possibly run for the Dems. Nevada Secretary of State Ross Miller and state Attorney General Catherine Cortez Masto could also make a run.

With New Mexico and Arizona also holding open seats in the next election, it looks like the hottest area of the country both figuratively and competitively will be the southwest.