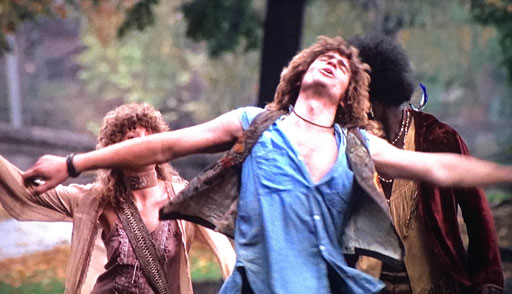 Talk about changing gears – NBC has announced that instead of the twice-delayed staging of the 1950s musical Bye, Bye, Birdie, it’s next live action musical planned for Spring 2019 will be the free-love, hippie-inspired HAIR .

According to The Hollywood Reporter, HAIR Live! will be executive produced by Craig Zadan and Neil Meron, the same team who brought TV audiences The Sound of Music, Peter Pan, The Wiz, Hairspray and the recent (fantastic!) Jesus Christ Superstar.

The logline for HAIR Live! reads:

The story of a group of politically active hippies living a bohemian life in New York while fighting against and resisting the Vietnam War. Claude, his good friends Berger and Sheila, and their “tribe” are coming of age in the world of the sexual revolution while struggling with their rebellion against the war and their conservative parents and society. Claude must decide whether to resist the draft as his friends have done, or succumb to the pressures of conservative America to serve in Vietnam, compromising his principles and beliefs.

Included in that tribe of friends is the openly gay character of “Woof” (how prophetic) who openly pines for Mick Jagger and sings the song, “Sodomy.”

Since its original groundbreaking Broadway run in 1968, HAIR has been revived several times including a recent a star-studded staging at the Hollywood Bowl and the 2009 Broadway revival which won the Tony Award for “Best Revival of a Musical.”

The musical received an acclaimed film adaptation by Milos Forman in 1979 starring John Savage, Beverly D’Angelo and an oh-so-woofy Treat Willams as “Berger.”

The musical addressed issues important to young people at the time – Vietnam War, drugs, race, gender and sexual identity – in a way no one had seen before. And a brief nude scene was considered “revolutionary” in the show’s early incarnations.

For years, the notorious nude scene at the end of the first act has drawn much attention. It’s highly doubtful TV audiences will see much of that in the NBC presentation. And it won’t be the first time the scene will be edited.

Producer Joe Papp cut the nude scene for the original Public Theater production. When the creators took a renewed look at the show in preparation for the move to Broadway, they wanted to put the nudity back in. However, there was a law on the books in New York City that said nudity was permitted on stage as long as the actors weren’t moving. And so, back in the 60’s and 70’s, the entire cast stood on stage together in a row, nude and perfectly still. That’s how the staging of the scene was born.

The show’s political hot-button issues weren’t the only attention grabbers at the time.

The music became a force of nature on the Billboard charts.

The original Broadway cast album (which won the Grammy Award for “Best Score from an Original Cast Show Album”) charted at #1 and spent three months in the top spot on the Billboard 200 chart in 1969 and spun-off 4 hit singles.

The Fifth Dimension’s medley of “Aquarius/Let the Sunshine In” spent 6 weeks as the No. 1 pop hit in 1969 and was the No. 2 single for the entire year (barely losing out the top honors to the Archies’ “Sugar, Sugar.”) Also reaching the Top 5 were Three Dog Night’s “Easy to Be Hard,” The Cowsills’ “Hair,” and Oliver’s “Good Morning Starshire.”

The recent live TV musical presentations have a somewhat hit-or-miss record in terms of success. While The Sound of Music was considered a success all-around, subsequent presentations like Peter Pan and The Wiz seemed to fall flat for this writer.

That trend was reversed with the recent Jesus Christ Superstar which seemed to find the gold with striking staging by five-time Tony Award nominee, British theater director David Leveaux, exceptional choreography by Camille A. Brown and a cast that included Sara Bareilles, Brandon Victor Dixon, John Legend and Alice Cooper.

No air date has been announced as yet for HAIR Live!