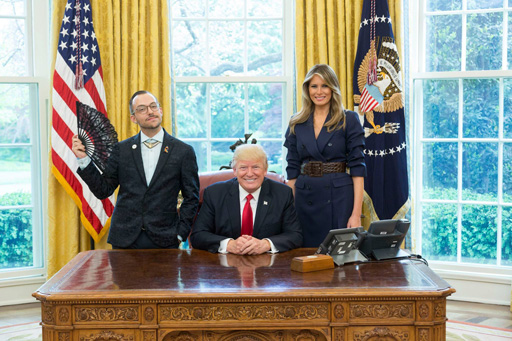 Rhode Island’s Teacher of the Year, Nikos Giannopolous (above), shared his thoughts on meeting the president and First Lady on his Facebook page.

On Wednesday, when I met the president as Rhode Island’s State Teacher of the Year, I did not know what to expect. After a lengthy security process, we were welcomed into the Roosevelt Room where we each met Secretary of Education, Betsy DeVos. Shortly thereafter, we walked into the Oval Office. The man seated at the desk read prepared remarks from a sheet of paper and made some comments about CEOs and which states he “loved” based on electoral votes that he had secured.

He did not rise from his seat to present the National Teacher of the Year with her much deserved award nor did he allow her to speak. We returned to the Roosevelt Room and one by one got a photo with him and his wife. After what amounted to a brief photo op, we were ushered out of the West Wing and back onto the streets of DC.

For my trip to the White House, I wore a rainbow pin to represent my gratitude for the LGBTQ community that has taught me to be proud, bold, and empowered by my identity – even when circumstances make that difficult. I wore a blue jacket with a bold print and carried a black lace fan to celebrate the joy and freedom of gender nonconformity. I wore an anchor necklace in honor of the State of Rhode Island whose motto “Hope” was inspired by Hebrews 6:19 – “We have this hope as an anchor for the soul, firm and secure.” These words are as relevant now they were when our founding father Roger Williams was inspired by them over 350 years ago.

In previous years, state teachers of the year were given the opportunity to speak to the president for a few minutes each. Had I been given the opportunity, I would have told him that the pride I feel as an American comes from my freedom to be open and honest about who I am and who I love.

I would have told him that queer lives matter and anti-LGBTQ policies have a body count. Taking pride in queer identity means rejecting the shame imposed upon us by a harsh society. It means opening yourself up to a lifetime of criticism and misunderstanding, but knowing that it’s worth it to be able to live authentically.

Each and every queer person has been confronted with cruelty in ways many cannot imagine – verbal and physical abuse from strangers, friends, & even family; politicians callously attacking on our right to love or merely exist in public spaces; legalized discrimination for daring to be who we are. Brutality is a universal part of the queer experience.

I am one of the fortunate ones. I have been able to share the last ten years of my life with my partner who understands me better than anyone in the world. I have a mother who always allowed me to be myself, highlighting my best qualities, and building up my confidence as a shield to any bigotry I may encounter. I have a sister, brother, father, sister-in-law, and brother-in-law who have accepted, celebrated, and loved me unconditionally for my whole life. I have a chosen family of queer friends and loved ones with whom I have formed deep and supportive relationships that will last a lifetime.

There’s more at the link.