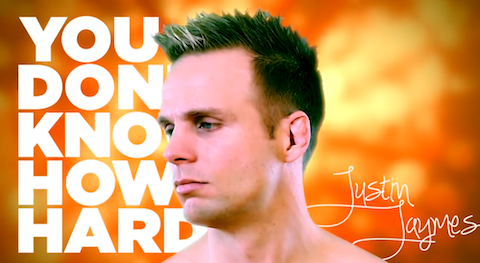 The world will never be the same again after the release of self-proclaimed, “Hottest Performing Artist Alive,” Justin Jaymes’ breakout music video. The “no-apologies” phenomenon drops his first music video for his single, “You Don’t Know How Hard” on YouTube today to share his plight with the world. The song is about the challenges someone as hot as Jaymes feels every day, with the chorus, “You don’t know how hard it is to be this hot.” The entirety of the video is shot in front of a green screen, while Jaymes girates with three buff, male dancers.

Jaymes, a self-taught “musician,” and citizen of clubs around the world, claims that the song is educational. He says, “I wrote this song for all those haterz that think what I do is easy. Listen, you simply don’t wake up this fabulous. It’s work, day in and day out.” As a “hotness expert,” Jaymes knows what he is talking about when he says, “the beat is sick. The message owns all the haterz who are always whispering about me at the club. And most of all, it’s hot. I mean, probably the hottest thing ever made.”

THE TRUTH BEHIND THE VIDEO:
Justin Jaymes is a fictional role played by real-life, guitar-toting, power-pop musician, Tom Goss, in Rob Williams’ upcoming indie film, Out to Kill. Not surprisingly, Goss’ character “Justin Jaymes” is the murder victim in the film.