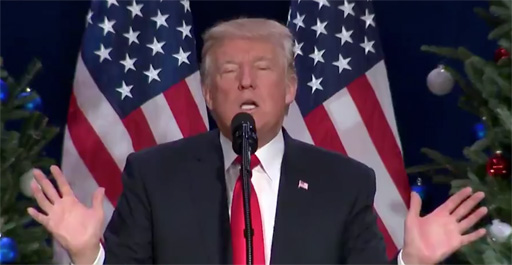 I keep hearing about this “War on Christmas” thing.

But where is it?

Donald Trump has said many times he will “bring Christmas back.” But where did it go?

Did we stop celebrating Christmas? I must have missed that one.

Trump tells folks all the time that we’re going to be able to say “Merry Christmas” again – but who stopped?

I know part of the rant from Trump is aimed at his favorite target, President Obama, who the Trumpster claims banned the words “Merry Christmas” from the nation.

MSNBC’s Chris Hayes sheds light on whether or not Barack Obama ever said the holiday Christmas greeting.

Donald Trump is claiming victory in the War on Christmas, saying he brought “Merry Christmas” back to the White House. We found plenty of evidence proving him wrong… #inners pic.twitter.com/fGBSbYybvx