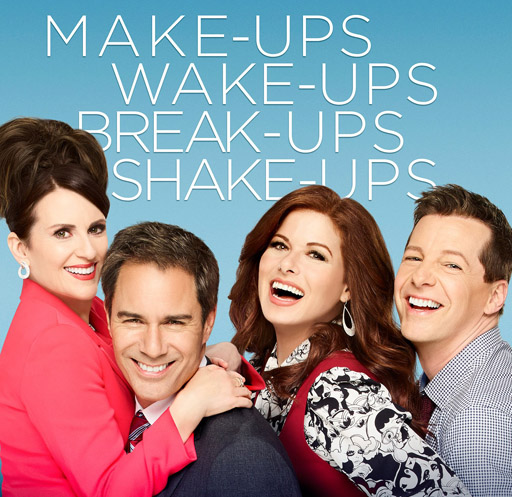 The fall television season is ramping up and as Will & Grace is prepping for reboot Season 2 (really the 10th season) of the NBC hit sitcom, and what we know so far is love is in the air for EVERYBODY:

• Will is the lucky guy who will get a new boyfriend in the form of hunky Matt Bomer who’s character is described as “a smooth-talking, self-satisfied TV news anchor. #Squee!

• Chelsea Handler is set to play a high-powered lesbian client of Grace who begins to date her sister.

What an amazing time shooting our latest episode last night. Can’t wait for you guys to see it. @nbcwillandgrace #WillAndGrace
A post shared by Sean Hayes (@seanhayes) on Aug 2, 2018 at 7:38am PDT

• Taking romance to another level is Jack who announced last season he planned on getting hitched to new boyfriend Estefan (Brian Jordan Alvarez).

• AND, Grace’s father (Martin Adler) and Will’s mother (the deliciously delightful Blythe Danner) shared their own plans to stroll down the aisle, which would effectively make besties Grace and Will sister and brother (awkward?).

• More guest stars! Self-declared “America’s sweetheart” and out Olympic bronze medalist Adam Rippon continues conquering hearts and minds as he’s set to cameo as a – you guessed it – figure skater.

• The brilliant Minnie Driver will return as Karen’s foe for life, Lorraine Finster.

• And co-creator Max Mutchnick has tweeted a tease of the return of ‘Anatasia Beaverhausen,’ Karen’s infamous alter-ego.

We’ll keep you posted on new developments as they’re announced.

The 10th season of Will & Grace premieres on NBC October 4.