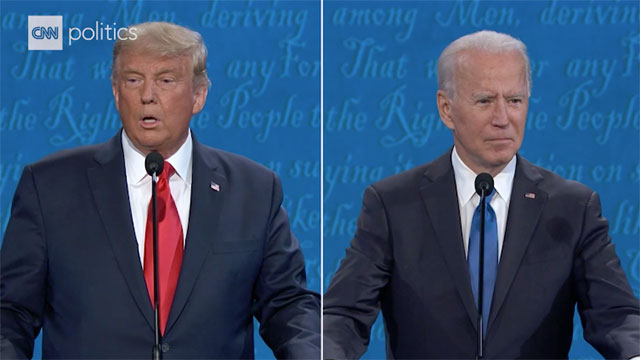 NowThis News serves up the “Top Moments” from the final presidential debate of the 2020 election cycle:

From Donald Trump comparing himself to Abraham Lincoln to Joe Biden blasting the president’s COVID-19 response, here are some of the biggest moments of the final 2020 presidential debate.

The last presidential debate between Donald Trump and Joe Biden was a lot less chaotic than the first.

Still, there were some big standout moments throughout the night, such as Donald Trump saying he was the ‘least racist person’ in the room and Joe Biden talking about the government’s coronavirus response.

Three quick real-time polls all showed most folks felt Joe Biden, as with the first presidential debate, came out on top.

This time, the instant polls had a consistent and clear story: Mr. Biden won the debate by a double-digit margin.

If the results in the chart look familiar, that’s because they’re reminiscent of many national survey results we’ve seen over the last month. You could interpret that to mean that the debate was more or less a draw on the merits, with most Biden supporters concluding that Mr. Biden won, and vice versa for the Trump supporters.

Indeed, the CNN/SSRS poll didn’t find that either candidate improved his favorability rating compared with interviews conducted before the debate.