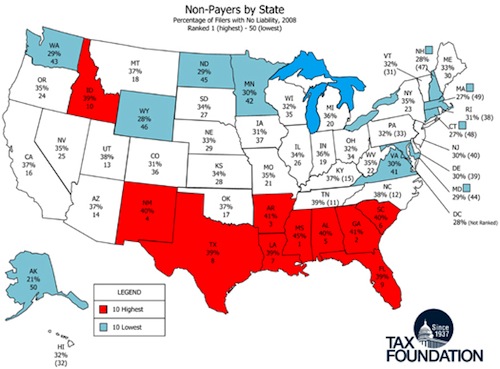 David Corn has found a video of Mitt Romney telling donors what he really thinks of voters.

This is the real Mitt, kids. Statements about the use of his wife in the campaign, about how he could do better if he were Latino and this:

And, I mean, the president starts off with 48, 49 [percent], he starts with a huge number. These are people who pay no income tax. Forty-seven percent of Americans pay no income tax. So our message of low taxes doesn’t connect. So he’ll be out there talking about tax cuts for the rich. I mean, that’s what they sell every four years.

And so my job is is not to worry about those people. I’ll never convince them they should take personal responsibility and care for their lives. What I have to do is convince the five to 10 percent in the center that are independents, that are thoughtful, that look at voting one way or the other depending upon, in some cases, emotion, whether they like the guy or not . . .

He continued: “[M]y job is is not to worry about those people. I’ll never convince them they should take personal responsibility and care for their lives.”

In other parts of the video, Romney shares that his campaign decided not to go too harshly at President Obama because the independents who voted for Obama last election don’t want to be told they made a mistake or they were wrong.

Romney also said about his father, “Had he been born of Mexican parents, I’d have a better shot of winning this.”

Interestingly, take a look at this map of the United States. The red states are the ones with the HIGHEST level of non-tax filers – the ones Romney calls the 47 percent.  The ones who don’t pay any federal taxes.  Notice where those states are?

Who did Mitt Romney just insult?

Watch more of the video at MotherJones