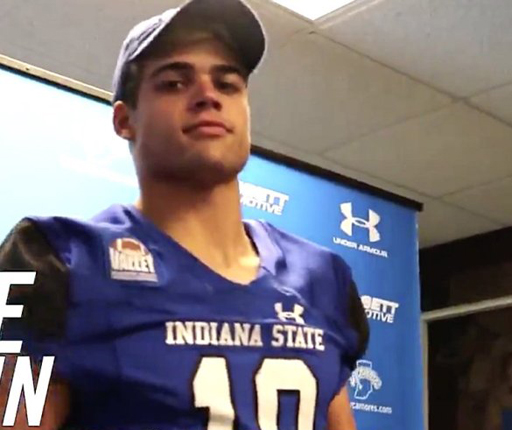 This seems like an amazing coming out story: Jake Bain is not only a star athlete/football player at John Burroughs High School in Missouri but has already signed to play football at Indiana State University next year.

The St. Louis Post-Dispatch has a great profile of Jake that really celebrates this awesome young man:

Two autumns ago, he scored three touchdowns in the state title game, but on this October day, his senior season ended unceremoniously. So the running back walked off the field, seeking solace in a hug from his boyfriend.

“I did notice that moment, and knowing that was the last game of Jake’s career, I thought, ‘How lucky is Jake for that?’” said John Merritt, the football coach at John Burroughs. “And what does that say about our community, that they can both express themselves without any fear?”

Jake Bain is the best athlete at his high school. He’d be the best athlete at most high schools. As a sophomore running back, he was named the Class 3 Offensive Player of the Year in Missouri. As a sophomore! And after winning the state title, he was selected team captain for his junior and senior seasons. On Wednesday, Jake signed to play college football — he’s headed to Indiana State next year.

He is openly gay.

“This is a kid who, in every traditionally stereotypical way, would not have been connected to that community,” said John Burroughs head of school Andy Abbott, “but in every authentic way, was and is.”

Jake seems like a really level-headed guy who folks naturally connect to.

It wasn’t all hugs and roses though. Jake endured his share of being called slurs on the football field and at one point he received tons of hateful text messages.

But he persevered and continues to be a leader and role model.

I really encourage you to read the full profile.

Check out this package by the local NBC affiliate:

“Is this the real life? Is this just fantasy?” Still can’t believe it, dreams really do come true. I’m officially a Sycamore🔵⚪️ #feartheforest
A post shared by Jake Bain (@jake.bain) on Dec 20, 2017 at 10:45am PST

Happy 1 year anniversary to the coolest guy in town. We survived Friday the 13th! Can’t wait to see what the future has in store for us♥️
A post shared by Jake Bain (@jake.bain) on Oct 13, 2017 at 6:04pm PDT