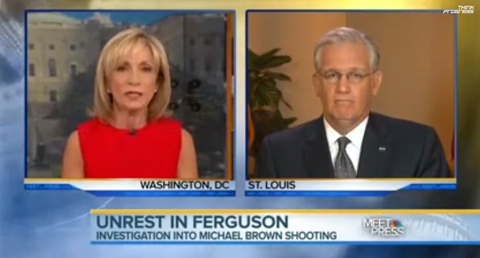 Gov. Nixon of Missouri addresses the latest developments in the Michael Brown shooting debacle, including the release of video allegedly showing Brown stealing cigars from a shop.

Nixon said he and the Justice Department disapproved of the video’s release as it only served to somehow disparage the character of the shooting victim.

We and our security team and the highway patrol didn’t know that was going to be released, and I don’t think the Attorney General knew that. Quite frankly we disagree deeply I think for 2 reasons. Number one to attempt in essence to disparage the character in the middle of a process like this is not right. It’s just not right. And secondarily it did put the community and, quite frankly, the region and the nation on alert again. These are old wounds, these are deep wounds in these communities and that action was not helpful.