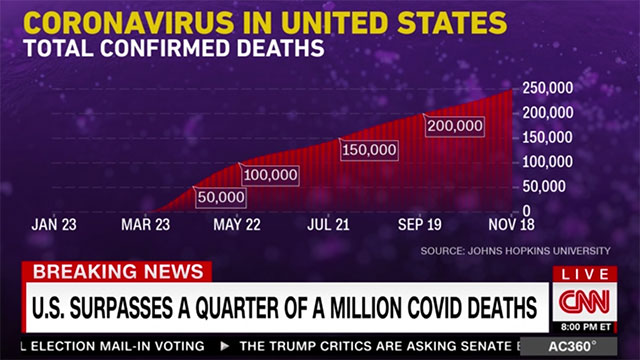 According to Johns Hopkins University, the U.S. saw the highest coronavirus-related death toll on Tuesday in more than six months with 1,707 fatalities.

The coronavirus is now killing at least one American every minute of the day, bringing the country to another horrific milestone on Wednesday: At least 250,029 people in the country have died of Covid-19 since the first death on February 29 in Washington state.

And it’s only going to get worse, said Dr. Jonathan Reiner, a professor at George Washington University School of Medicine.

“The horrible death count that we saw yesterday in the United States … reflects the number of people who were being infected three weeks ago — two to three weeks ago, because that’s the lag,” Reiner said Wednesday.

And Donald Trump told his supporters just weeks ago, “We’re rounding the curve…”

“We’re rounding the curve,” Trump says of the coronavirus, although cases continue to rise across the U.S. pic.twitter.com/UvGXER1n74