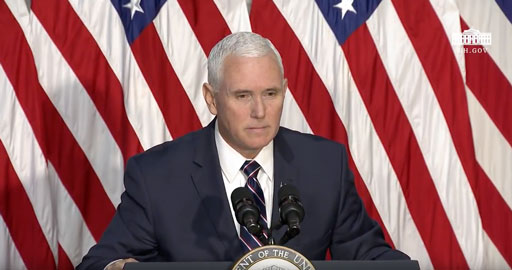 In advance of the 30th observance of World AIDS Day (December 1), Vice President Mike Pence spoke at a White House event where he boasted of the current administration’s ‘accomplishments’ on HIV/AIDS.

Since 1988, December 1 has been acknowledged as a day dedicated to raising aware of the AIDS pandemic that has claimed more than 35 million lives worldwide.

Pence’s speech was filled with wild inaccuracies as he attempted to credit Donald Trump with bringing “a renewed energy and focus” to the HIV/AIDS epidemic.

That statement alone represents the height of hypocrisy.

Celebrating the 15th anniversary of PEPFAR (President’s Emergency Plan for AIDS Relief), Pence told the audience at the event that the president plans on signing a bill soon that will reauthorize the program.

What he didn’t mention is that Trump’s own budget proposal called for a 17% reduction in funding for the program, in addition to $425 million to be cut from the Global Fund to Fight AIDS, Tuberculosis, and Malaria.

Hailing the success of the Ryan White HIV/AIDS program, which provides health coverage for low-income people with HIV/AIDS, the Vice President failed to tell the crowd that the administration diverted funds from the program this year to help pay for separating families at the Mexican border.

Additionally, the president fired the remaining 16 members of the Presidential Advisory Council on HIV/AIDS after 6 prominent members resigned over his indifference to the issue.

In the nearly two years since Trump took office, no one has been appointed to lead the White House Office of National AIDS Policy. How do you take credit for ‘renewed energy and focus’ when you haven’t even asked someone to lead the charge against the disease?

Then there’s the “Deploy or Get Out” policy which could mean the discharge of HIV+ U.S. military service members. The policy, announced in February of this year, directed the Pentagon to remove any military personnel who are considered undeployable to serve outside of the U.S. for 12 consecutive months “for any reason.”

And, for the second year in a row, at no time did Pence, nor any other White House official, acknowledge the disproportionate impact HIV/AIDS has had on the LGBTQ community.

In 2016, two-thirds of all new HIV diagnoses in the United States were gay and bisexual men.

Even going back to before Pence’s time in the current administration, there was his woeful record as a congressman and governor of Indiana on the issue of HIV.

Running for congress in 2000, his campaign website stated that funds from the Ryan White program should be “directed toward those institutions which provide assistance to those seeking to change their sexual behavior.”

As Governor of Indiana, Pence opposed a needle exchange program which would have slowed HIV infections in rural counties in his state. It was only after 200 people became infected in just one county that he allowed the program to be implemented.

Chad Griffin, president of the Human Rights Campaign, tweeted his criticism of the speech, calling out Pence’s hypocrisy and misinformation:

.@mike_pence marking #WorldAIDSDay right now is truly the height of hypocrisy. From spreading misinformation about condom use, to contributing to a major outbreak of HIV & AIDS in his home state, Pence has put ideology before the health & lives of countless people. #RealMikePence

And longtime LGBTQ activist and author Michelangelo Signorile pulled no punches in his assessment of Pence’s remarks:

This is perhaps the most horrific slap we’ve seen from this administration.

A gay-hating, religious zealot who allowed HIV to explode in Indiana as governor by cutting funds, pushing abstinence. https://t.co/JlwuhNdGau