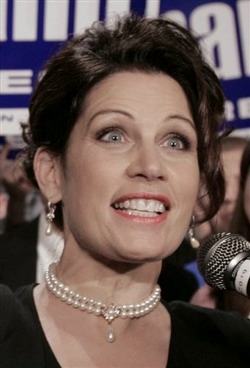 After a rousing speech to a joint session of Congress where President Obama presented a job growth plan comprised mainly of Democratic/Republican backed ideas (that are almost completely tax cuts) to promote job growth, Rep. Michele Bachmann said she felt “deeply disappointed” by the president’s jobs speech Thursday and called on Congress to avoid passing his plan.

“Clearly what we saw was just a sequel of all of the failed policies that the president has put forward in the past,” Bachmann said in a post-debate speech.

Bachmann, who said she listened to the speech in the car while stuck in traffic (if that isn’t a metaphor, I don’t know what one is), gave her own response in the House gallery in the Capitol Thursday.

She said she was offended by President Barack Obama’s remarks asking Congress to “stop the political circus” and do something to help the economy.

Specifically, she blasted the president’s plan to prolong unemployment benefits, calling them poor incentives for people to get jobs.

“Not only should Congress not pass this plan,” Bachmann said. “I say, ‘Mr. President, stop. Your last plan hasn’t worked, and it’s hurting the American economy’.”

In other words, anything “anti-Obama.”

What is sad is Bachmann has devolved into the kind of political “character” that can be counted on, that when the President says ‘white’ – she says ‘black.’

It has little to do with actually helping the people of the United States. It has become an ugly play of gamesmanship.