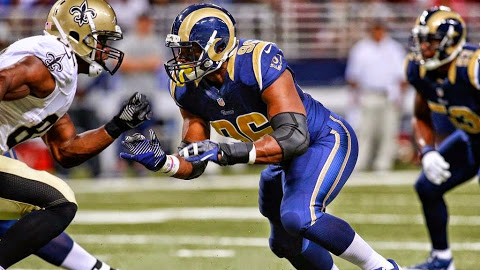 Last night, out NFL-er Michael Sam took to the field for the first time with the St. Louis Rams.

In fact, it’s curious that Sam played as early as he did. When the Rams’ first “official” depth chart was released a few days ago, Sam was listed as a third-stringer, but he entered the game with the twos.

As Tom Pelissero of USA Today pointed out, it didn’t take long for Sam to make a little noise, at which point the fans in attendance showed their support:

Sam played the rest of the first half, finishing with one solo tackle, one quarterback hit and one QB hurry. With rushing the passer being Sam’s forte, he expectedly looked most comfortable while going after the signal-caller, even if he wasn’t able to seal the deal.

It was about what you’d expect from a seventh-round pick fighting to make the team: Sam showed good burst on the play that got him his tackle, but he almost let the ball-carrier slip through his grasp. On some snaps he looked comfortable, and on others he looked lost.

After the game, Hall of Fame wide receiver had this to say about Sam: “He showed that he can play in this league.”